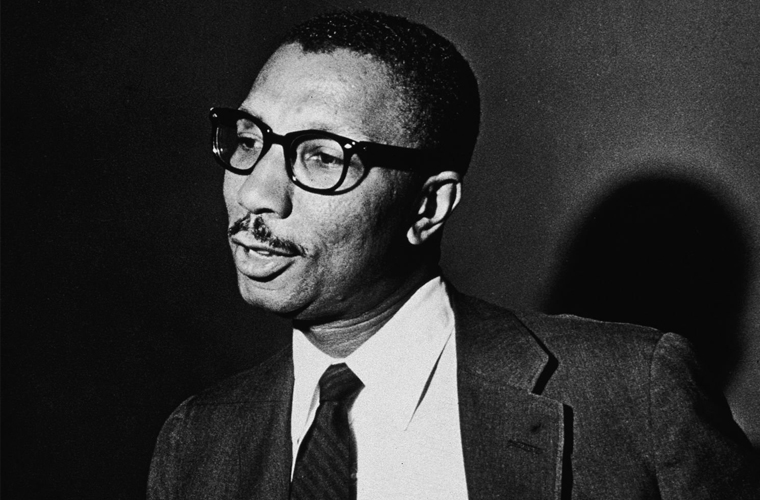 Born on March 11, 1917, in Careyville, Florida, Robert L. Carter moved north to Newark, New Jersey, as an infant, with his mother. Carter’s childhood was beset by family tragedy. He lost three siblings and his father, all during his early childhood years. Studious and introspective, Carter excelled in school, skipping two grades and graduating from high school at age 16. He received a scholarship that enabled him to attend Lincoln University, and upon receiving his A.B. in Political Science, was offered a scholarship to Howard University’s School of Law.

After obtaining his Master’s in Law from Columbia University, Carter was drafted into the armed forces. The pervasive racial prejudice he encountered affected him deeply, and shortly after he ended his tour of duty, he was hired as an assistant to NAACP lawyer Thurgood Marshall. Carter would stay on as a lawyer for the NAACP for the next 24 years. During his tenure, he argued 22 cases before the U.S. Supreme Court (including Brown v. Board of Education (1954)) and won 21.

After Brown v. Board of Education, many southern states sought to stem the tide of desegregation by aggressively intimidating the organization most responsible, the NAACP. Attempting to incapacitate the NAACP, southern states passed legislation that required the organization to make its membership lists public, believing that this would intimidate and cow NAACP supporters. In a series of cases, beginning with NAACP v. Alabama (1958), Carter argued successfully that such legislation violated the NAACP’s first amendment right to free speech because it was clearly intended to intimidate people. In each instance, the Supreme Court ruled in favor of Carter and the NAACP; the membership maintained its anonymity, and the NAACP remained a powerful force for desegregation in the South.

After leaving the NAACP in 1968, Carter spent several years at a private law firm before he was appointed as a U.S. District Court Judge for the Southern District of New York in 1972. He held adjunct faculty positions at the University of Michigan and New York University law schools and at Yale University graduate school. Carter was an outspoken advocate of equal rights and made headlines when he decried the rampant racial prejudice plaguing the criminal justice system.

Over his lengthy and esteemed career, Judge Carter was the recipient of many awards, honors, and degrees. He sat on dozens of boards, committees, and task forces and published numerous articles.