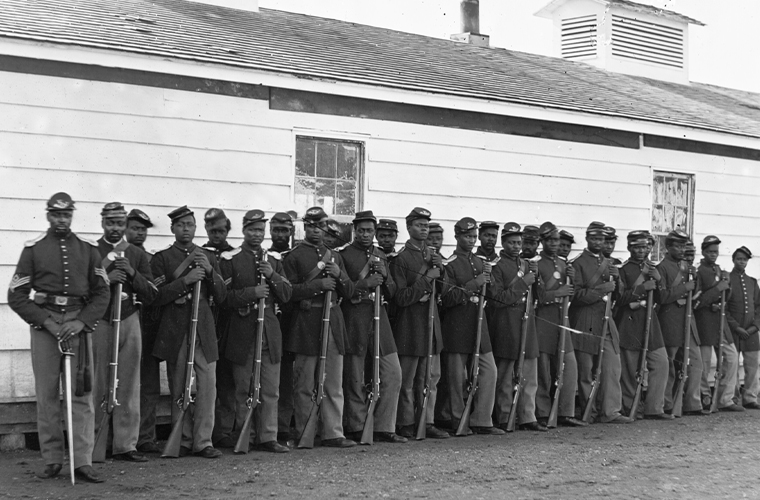 “Once let the black man get upon his person the brass letter, the U.S., let him get an eagle on his button, and a musket on his shoulder and bullets in his pocket, there is no power on earth that can deny that he has earned the right to citizenship.” Frederick Douglass

The issues of emancipation and military service were intertwined from the onset of the Civil War. News from Fort Sumter set off a rush by free black men to enlist in U.S. military units. They were turned away, however, because a Federal law dating from 1792 barred Negroes from bearing arms for the U.S. army (although they had served in the American Revolution and in the War of 1812). In Boston, disappointed would-be volunteers met and passed a resolution requesting that the Government modify its laws to permit their enlistment.

The Lincoln administration wrestled with the idea of authorizing the recruitment of black troops, concerned that such a move would prompt the border states to secede. When Gen. John C. Frémont (photo citation: 111-B-3756) in Missouri and Gen. David Hunter in South Carolina issued proclamations that emancipated slaves in their military regions and permitted them to enlist, their superiors sternly revoked their orders. By mid-1862, however, the escalating number of former slaves (contrabands), the declining number of white volunteers, and the increasingly pressing personnel needs of the Union Army pushed the Government into reconsidering the ban.

As a result, on July 17, 1862, Congress passed the Second Confiscation and Militia Act, freeing slaves who had masters in the Confederate Army. Two days later, slavery was abolished in the territories of the United States, and on July 22 President Lincoln presented the preliminary draft of the Emancipation Proclamation to his Cabinet. After the Union Army turned back Lee’s first invasion of the North at Antietam, MD and the Emancipation Proclamation was subsequently announced, black recruitment was pursued in earnest. Volunteers from South Carolina, Tennessee, and Massachusetts filled the first authorized black regiments. Recruitment was slow until black leaders such as Frederick Douglass encouraged black men to become soldiers to ensure eventual full citizenship. (Two of Douglass’s own sons contributed to the war effort.) Volunteers began to respond, and in May 1863 the Government established the Bureau of Colored Troops to manage the burgeoning numbers of black soldiers.

By the end of the Civil War, roughly 179,000 black men (10% of the Union Army) served as soldiers in the U.S. Army and another 19,000 served in the Navy. Nearly 40,000 black soldiers died over the course of the war—30,000 of infection or disease. Black soldiers served in artillery and infantry and performed all noncombat support functions that sustain an army, as well. Black carpenters, chaplains, cooks, guards, laborers, nurses, scouts, spies, steamboat pilots, surgeons, and teamsters also contributed to the war cause. There were nearly 80 black commissioned officers. Black women, who could not formally join the Army, nonetheless served as nurses, spies, and scouts, the most famous being Harriet Tubman (photo citation: 200-HN-PIO-1), who scouted for the 2d South Carolina Volunteers.

Because of prejudice against them, black units were not used in combat as extensively as they might have been. Nevertheless, the soldiers served with distinction in a number of battles. Black infantrymen fought gallantly at Milliken’s Bend, LA; Port Hudson, LA; Petersburg, VA; and Nashville, TN. The July 1863 assault on Fort Wagner, SC, in which the 54th Regiment of Massachusetts Volunteers lost two-thirds of their officers and half of their troops, was memorably dramatized in the film Glory. By the war’s end, 16 black soldiers had been awarded the Medal of Honor for their valor.

In addition to the perils of war faced by all Civil War soldiers, black soldiers faced additional problems stemming from racial prejudice. Racial discrimination was prevalent even in the North, and discriminatory practices permeated the U.S. military. Segregated units were formed with black enlisted men and typically commanded by white officers and black noncommissioned officers. The 54th Massachusetts was commanded by Robert Shaw and the 1st South Carolina by Thomas Wentworth Higginson—both white. Black soldiers were initially paid $10 per month from which $3 was automatically deducted for clothing, resulting in a net pay of $7. In contrast, white soldiers received $13 per month from which no clothing allowance was drawn. In June 1864 Congress granted equal pay to the U.S. Colored Troops and made the action retroactive. Black soldiers received the same rations and supplies. In addition, they received comparable medical care.

The black troops, however, faced greater peril than white troops when captured by the Confederate Army. In 1863 the Confederate Congress threatened to punish severely officers of black troops and enslave black soldiers. As a result, President Lincoln issued General Order 233, threatening reprisal on Confederate prisoners of war (POWs) for any mistreatment of black troops. Although the threat generally restrained the Confederates, black captives were typically treated more harshly than white captives. In perhaps the most heinous known example of abuse, Confederate soldiers shot to death black Union soldiers captured at the Fort Pillow, TN, engagement of 1864. Confederate General Nathan B. Forrest witnessed the massacre and did nothing to stop it.

The document featured in this article is a recruiting poster directed at black men during the Civil War. It refers to efforts by the Lincoln administration to provide equal pay for black soldiers and equal protection for black POWs. The original poster is located in the Records of the Adjutant General’s Office, 1780’s–1917, Record Group 94.