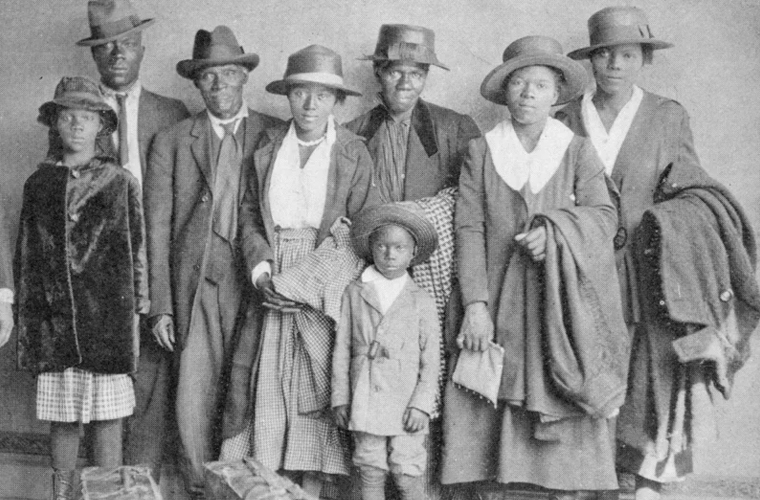 A “Northern Invasion” was coming, the Chicago Defender declared in early 1917: that spring, specifically May 15, would begin the Great Northern Drive. Southern blacks would abandon Jim Crow’s regime and seek their economic and social freedoms in the North. And Chicago was waiting for them. The Defender, which was founded 110 years ago this month, was the most influential African American newspaper of the 20th century, not least because its entrepreneurial founder and editor, Robert Sengstacke Abbott, used it as a catalyst for the Great Migration, a movement that would change the color and composition of American cities.

Some of the littlest members of this invasion were girls and teenage women, whose stories have yet to be fully told. Reaching across a century, their tale draws a direct line from the desperate denizens of the Jim Crow South to the striving residents of Northern cities—and all the way to the White House.

Luckily, their stories have been preserved, and in their own words. In response to Abbott’s call, thousands of letters poured into the Defender’s South Side Chicago office. Would-be migrants sought employment connections, train tickets, and any form of confirmation that ‘up North’ would be everything Abbott promised and more. Among these dream-seekers who put pen to paper to plan their great escapes were scores of girls and teenage women. These letters, printed in the pages of the Defender, and other reflections from African American girls who settled on Chicago’s South Side, fueled my scholarly search to understand how girls experienced, shaped and understood the mass exodus that roughly spanned 1917 to 1970, during which an estimated 7 million blacks settled in urban corridors.

Girls’ letters to Abbott spoke volumes of the struggles of everyday life. Girls revealed the poignancy of being a child while confronting the very adult economic pressures families endured. Girls labored as sharecroppers, domestics, and low-wage workers in the post-Reconstruction South, and they hoped Chicago could provide better-paying jobs. Older teenage girls shouldered the responsibility of supporting families at the expense of their education. Girls also hoped that they could use the beauty products or attend the dance venues that the Defender advertised. They wanted to remake themselves into city girls—modern, stylish, and in control of their futures.

“Dear Sir: I am a reader of the Chicago Defender I think it is one of the Most Wonderful Papers of our race printed. Sirs I am writing to see if You all will please get me a job. And Sir I can wash dishes, wash iron nursing work in groceries, and dry good stores. Just any of these I can do. Sir, who so ever you get the job from please tell them to send me a ticket and I will pay them. When I get there as I have not got enough money to pay my way. I am a girl of 17 years old and in the 8 grade at Knox Academy School. But on account of not having money enough I had to stop school. Sir, I will thank you all with all my heart. May God Bless you all.”

Ten days before Abbot’s Northern Migration Day, a girl from Port Arthur, Tex., asked him for money for transportation and ultimately a pathway to transform her life.

That same summer, in August, a 15-year old girl from New Orleans pleaded with Abbott:

“Dear sir: i am writing you for help I heard of you by telling my trouble I was to to right you. I wont to come ther and work I have ben looking for work here for three month…i am 15teen…if you will sin me a pass you will not be sorry I am not no lazy girl i am smart I have got very much learning but I can do any work that come to my hand.”

Some girls sought advice about migration without their parents’ consent, believing that they knew what was best for their families. A teenager from Alexandria, La., risked angering her father by seeking advice about Chicago.

“There isn’t a thing for me to do, the wages here is from a dollar and a half a week. What could I earn Nothing…I have and a mother and a father my father does all he can for me but it is so hard. A child with any respect about her self or his self wouldn’t like to see there mother and father work so hard and earn nothing I feel it my duty to help…father seems to care and then again don’t seem to but Mother and I am tired of all of this. I wrote to you all because I believe you will help.”

Mothers also wrote to Abbott hoping to create better opportunities for their daughters, many of whom began working as domestics in white households before they had their tenth birthdays and rarely attended their one-room schoolhouse during the cotton harvest season.

“Gentlemen: I want to get in touch with you in regard of good location & a job i am for race elevation every way. I want a job in a small town somewhere in the north where I can receive very good wages and where I can educate my 3 little girls and demand respect of intelligence.”

It’s hard to track what happened to those specific writers, but few, if any, may have imagined that their journey would lead to the monumental demographic shifts that globalized black culture and would yield a black First Lady, the granddaughter of a migrant, who proudly called herself a “South Side Girl” while campaigning for her husband.

Nearly a century after the initial call for blacks to seek their destiny in the industrial centers of the nation, the Great Migration’s complicated legacy continues to shape the dialogue about race relations and the broad scope of topics now called ‘urban,’ from housing to employment to education. As producer Shonda Rhimes prepares to bring Isabel Wilkerson’s Great Migration story The Warmth of Other Suns to television audiences and as art lovers flock to New York’s Museum of Modern Art to catch the rare display of all of Jacob Lawrence’s Migration Series paintings together, we have to remember that we have much more to learn, see and hear from the Great Migration. Girls’ stories, especially their letters, make real the urgency and the hope of the domestic migration that changed the world.

Marcia Chatelain is an Assistant Professor of History and African American Studies at Georgetown University in Washington, D.C. Her first book South Side Girls: Growing up in the Great Migration was released by Duke University Press in 2015.