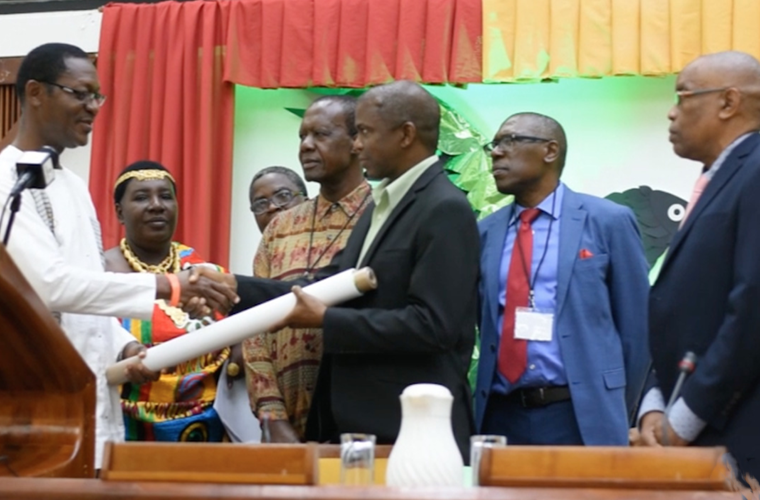 Nana Dr. Ama Amissah III, President of Queen Mothers Association of the Central Region of Ghana, will be participating in a symbolic reconciliation and apology ceremony relating to the role of African tribal leaders in the Trans-Atlantic slave trade on Wednesday, at the Jamaica Christian Diaspora Conference, at the Jamaica Conference Centre.

Amissah III will be part of a six-person delegation from both the African Forum on Religion and Government (AFReG) and the Ghanaian Tribal Leadership attending the event.

The apology, to be read immediately following the official opening of the two-day conference, will be presented to representatives of the Church in Jamaica at the event in the form of a scroll for the permanent exhibition.

The handing over will follow a presentation by Professor Emeritus Maureen Warner-Lewis, Professor of Literature and English at UWI, on “The Impact of Slavery on the People of the Caribbean and The Americas – Changing their Narratives.”

Also during the official opening ceremony Guy Hewitt, former Barbados High Commissioner to the US, will speak on the current Windrush issue, just before the keynote address by the Minister of Justice, Delroy Chuck. Hewitt will present on “The Caribbean Commitment:  The Journey of the Caribbean People and the Work of the Church in Respect of that Journey (Past, Present, and Future)”.

Scores of government and church leaders; members of churches and civil society and representatives of the Jamaican Diaspora across the globe are expected to attend the two-day conference which is the second in the series, staged by the local para-church organization, Operation Save Jamaica along with the UK, Canada, and other Christian Diaspora Alliances.

The conference will examine ways that the church community and Jamaican church in the Diaspora can work together to give greater support to nation-building and leverage the collective human capital and other resources to address foundational and symptomatic ills affecting Jamaica and the region.

According to Pastor Bruce Fletcher, chairman of Operation Save Jamaica:  “We will be examining how the church, state and private sector partnerships can better help to reduce crime, violence and increase youth empowerment while creating better communities for the future”.