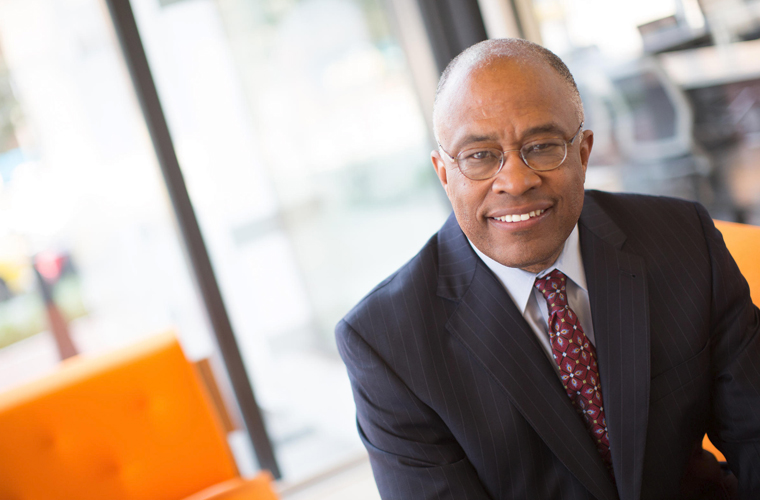 Kurt L. Schmoke, born in Baltimore, Maryland, in 1949, came from a middle-class background.  His father, Murray, a civilian chemist for the U.S. Army, was a graduate of Morehouse College, and his mother, Irene was a social worker. Schmoke attended the city’s prestigious public high school, Baltimore City College, winning both academic and athletic distinctions, and leading his school to a state championship in football.  Schmoke entered Yale University in 1967 and three years later, he acted as a student leader to help defuse a crisis in 1970 over the New Haven murder trial of Black Panther Bobby Seale.  After graduating from Yale, Schmoke studied as a Rhodes Scholar at Oxford University.  In 1976 he graduated from Harvard Law School.  Following a brief career in Washington, D.C., serving on the White House Domestic Policy Staff and at the Department of Transportation during the Administration of President Jimmy Carter, he returned to Baltimore and was elected to the position of State’s Attorney in 1982, and five years later he won the election for mayor of Baltimore.

His opponent in the first mayoral race was an African American incumbent, Clarence Burns who had been chosen by the former white mayor, William Donald Schaefer when he left office upon his election as Governor of Maryland.  Incumbent Burns, who ran on Schaefer’s record, emphasized the spectacular development of the Inner Harbor area, which had been transformed from a dilapidated waterfront into a glittering tourist attraction.  Claiming that Baltimore had become “prettier but poorer,” Schaefer focused on other areas of the city, particularly the black community, and at the age of 38 won a very close election.   Schmoke would win reelection twice, serving as mayor of Baltimore for twelve years from 1987 to 1999.

During his three terms in office, Schmoke faced typical big-city problems, including poor quality schools, drug addiction, and violent crime.  Some of his controversial positions included advocating the decriminalization of drug use and employing Nation of Islam security guards in a housing project.   His achievements included improving the environment of low-income housing projects, a needle-exchange program for addicts, keeping the tax rate stable, and attracting the Ravens football team to Baltimore.  Despite his achievements, Schmoke acquired a reputation as a bland technocrat, not an inspiring leader.  Declining to run for a fourth term, he accepted a position in 1999 with the Baltimore office of the law firm of Wilmer, Cutler, and Pickering.

In 2003 Kurt Schmoke became Dean of the Howard University School of Law.  He assumed his duties as the 50th anniversary of the U.S. Supreme Court’s 1954 decision in Brown v. Board of Education was approaching and led the school in playing a major part in the national commemorations.  Schmoke continued to be influential in Maryland politics.  In 2005, when he supported the gubernatorial candidacy of Montgomery County Executive Douglas Duncan, speculation arose about his own plans to run as U.S. Senator.   After the semi-centennial of Brown v. Board, he continued to keep the School of Law in a leadership position through the appointment of prominent faculty, as well as his own activities, including leading the preparation of Howard’s amicus curiae brief in the University of Michigan affirmative action case Grutter v. Bollinger in 2003, and assisting in the defense of Mychal Bell, one of the six youths on trial in Jena, Louisiana, in June of 2007.