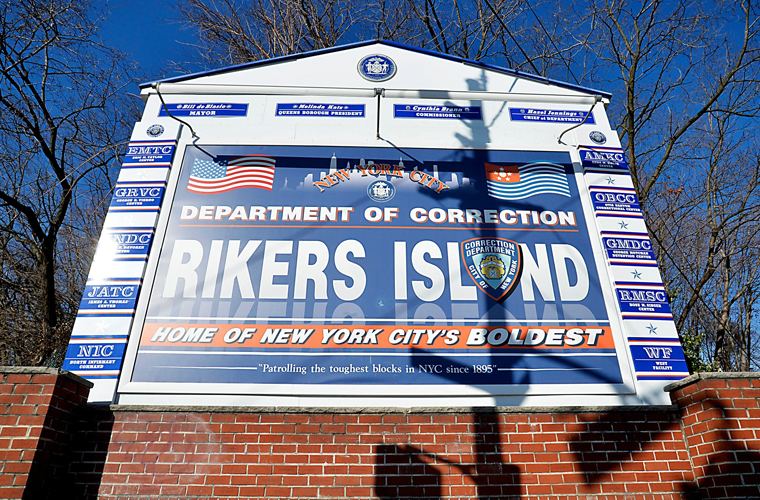 Maybe New York’s most infamous jail shouldn’t bear the name of a 19th-century judge who sent free African Americans back into slavery.

As much as the slave-trade market played a role in building the city of Charleston, South Carolina, and many other cities across the South, Northern cities were no less complicit in the industry of purchased lives. New York City, in fact, held more slaves in the 18th century than any other city except for Charleston. It’s no surprise then that many of the buildings, streets, banks, and plenty of other New York City landmarks carry the names of slaveowners or slavery supporters. Count Rikers Island city jail among that batch. The island the jail sits on is named for Abraham Riker (or Abraham Rycken), a Dutch immigrant who acquired the land in the early 17th century, and whose family owned it until selling it to the city in 1884. Abraham’s descendant Richard Riker was infamous in the 1800s for abusing the Fugitive Slave Act to send (or sell) African Americans in New York to slaveowners in the South, according to historians.

According to Eric Foner, the Pulitzer Prize-winning Columbia University history professor who wrote Gateway to Freedom: The Hidden History of the Underground Railroad, out this year, Riker was the latter. From the 1810s to the 1830s, when the abolitionist movement was gathering steam, particularly with its role in the Underground Railroad, Foner writes that Riker was moving the city in the opposite direction. Riker used his wealth and power as a presiding judge over New York City’s primary criminal court to see to it that African Americans were swiftly deemed “fugitive” runaway slaves, without granting them due process to prove they were actually free. The 19th-century historian Benson John Lossing offers another version of Riker. He writes in his 1884 book, History of New York City, that Riker was an “upright and sagacious judge at the head of a court, and an estimable citizen.” Later in the book, Lossing details an episode where Riker intervened as a group of “colored people” fled from an angry white mob. According to Lossing, Riker stopped the assailants and then “led the colored people in safety to the City Hall, where they were kept in security until morning.” Still, Foner’s book recounts a number of events where Riker provided the opposite of asylum for black New Yorkers who appeared before his bench. In one of those cases, writes Foner:

A North Carolina slaveowner, Dr. Rufus Haywood of Raleigh, staged a midnight raid on the home of one Lockley. Despite protests that he was a free man, Lockley, his wife, and their twelve-year-old daughter were imprisoned as fugitives, and after a series of hearings before Recorder Richard Riker, they were taken south by Haywood.

Foner also pulls evidence from Elizur Wright Jr.’s early 19th-century newsletter “Chronicles of Kidnapping,” which “told the stories of black persons who had been shipped south by city officials without a hearing and of accused fugitives who had spent months in prison before their cases were adjudicated.”

Riker used his power as a judge to deem African Americans “fugitive” slaves, without granting them due process to prove they were actually free.

That last part sounds a lot like what happened just recently with Kalief Browder, the African-American teenager who spent more than 1,000 days in Rikers Island awaiting a trial that never came after he was accused of robbery. He was released in 2013 but committed suicide this past June after leaving the Rikers Island compound mentally and emotionally scarred from his ordeal.

Rikers Island has been flagged multiple times for the abuse inmates have suffered at what today is considered one of the largest—and what Mother Jones has identified as one of the cruelest—jails in the nation. Roughly 95 percent of Rikers inmates are black or Latino, by some estimates. It may not close any time soon, but Morris hopes the jail could at least become detached from the legacy of a man who was, by Foner’s account, extremely complicit in a system that was equally invested in turning African Americans into fugitives and prisoners.