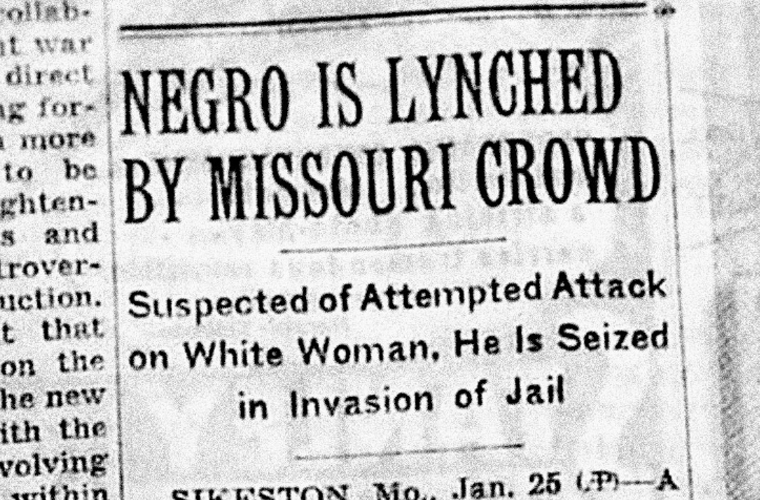 In the early hours of Sunday, January 25, 1942, a black man named Cleo Wright was arrested on charges of assaulting a white woman. Wright was shot several times by a city night marshal during his arrest, but the local hospital refused to admit him for treatment due to his race. Police initially brought the ailing Wright to his home to die, but later returned him to the city jail, where a white mob gathered to lynch him.

In the late 1930s and early 1940s, many Americans depended upon New Deal programs designed to stimulate the economy and provide for the country’s growing poor following the stock market crash of 1929. When discriminatory local administration of these programs created racial inequality, resulting protests and unrest often increased racial tensions. During this era in Sikeston, Missouri, racial inequality in the implementation of New Deal agricultural programs led to protest and stimulated anti-black sentiment among white residents.

Against this backdrop and during this era, the deep racial hostility that permeated Southern society burdened black people with a presumption of guilt that often served to focus suspicion on black communities after a crime was discovered, whether evidence supported that suspicion or not. White Americans’ allegations against black people were rarely subject to scrutiny and often sparked violent reprisal before the judicial system could or would act.

After Mr. Wright’s violent arrest, a mob of 75 white men had formed at the jail. They soon overcame city and state police officers and abducted the nearly unconscious Cleo Wright from his cell. The mob then dragged him through the streets of Sunset Addition, Sikeston’s predominantly black neighborhood, where the mob forced Wright’s wife to examine his body, then burned the corpse in front of two black churches in the presence of hundreds of black churchgoers.

Like many lynchings, this killing was not just a response to perceived resistance to the established racial order, but was a stunning message to the entire African American community that no dissent would be tolerated. Mr. Wright’s brutal killing terrified Sikeston’s black community and an estimated one hundred black residents fled soon after.

Condemned by a number of newspapers around the country, the lynching of Cleo Wright received national attention and led to the first ever Department of Justice investigation of a lynching. Nevertheless, a grand jury refused to indict the perpetrators, and no one was ever convicted.