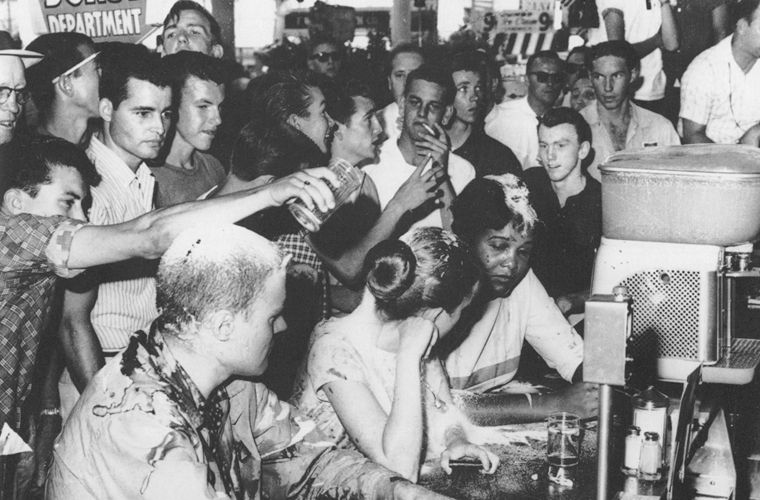 In this photo we see John Salter (a Native-America/Scottish professor now known as Hunter Bear Gray), Joan Trumpauer (later known as Joan Mulholland, one of two white students at Tougaloo College) and Anne Moody (a Tougaloo student who later wrote a book about growing up in Mississippi).

A small group of students and faculty from Tougaloo College, a private and historically black institution in Jackson, drove downtown and sat at the lunch counter at the five-and-dime store. The group at first consisted of two African American women and one African American man. They were later joined five other Tougaloo students and professors, white and black.

The practice of segregated seating at Woolworth’s lunch counters was part of the store’s stated official policy of following “local custom” (i.e. segregated seating in the South). The attempt to integrate dining places was part of a months-long boycott by blacks of white-owned businesses. Although the group sat peacefully, a white mob arrived, spitting, shouting obscenities at the protestors, dousing the group with condiments and hot coffee, and beating some of them. One student was knocked unconscious. One of the white Tougaloo students who participated in the sit-in recalled the “ugly roar” of the crowd.