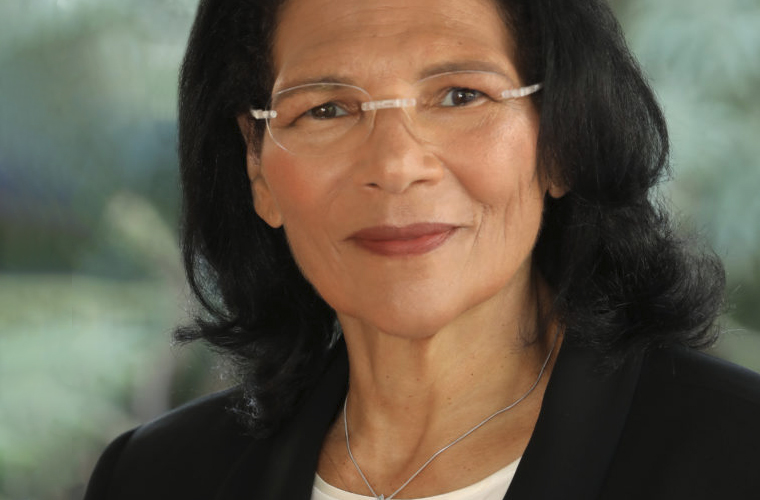 In 1986 Anita DeFrantz became the first American woman and first African American to serve on the International Olympic Committee (IOC). Her inclusion was considered groundbreaking in an institution that has been dominated by white men and non-athletes. DeFrantz was a former rower, who first became involved in organized sports when she was in college. She competed in the 1976 Olympics in Montreal, the first Olympic Games to include rowing, where her team won the bronze medal. After completing law school, DeFrantz protested the U.S. boycott of the 1980 Olympics in the Soviet Union, where she had also hoped to compete. Despite the unpopularity of this challenge, she was soon working for the U.S. Olympic Committee (USOC), starting with the 1984 Olympics in Los Angeles. DeFrantz has been the president of the Amateur Athletic Foundation of Los Angeles since 1987 and serves on the boards of numerous sports organizations. She made an unsuccessful bid to become the first female president of the IOC in 2002. An advocate for athletes including children, women, and minorities, she is one of the most influential women in sports.

Growing up in Indianapolis, Indiana, DeFrantz watched her brothers play basketball but did not have similar opportunities to compete. As a student at Connecticut College, her five foot-eleven figure made her a welcome candidate for the rowing team. Her aptitude for the sport put her on the U.S. women’s team at the Montreal Olympics in 1976. The team was awarded the bronze medal in the first Olympic event of its kind, placing behind East German and Soviet teams. DeFrantz continued to row while in law school at the University of Pennsylvania and would be part of every national team from 1975 to 1980, including the silver medal-winning team at the 1978 World Championships.

In 1976 DeFrantz became an advocate for athletes when she joined the U.S. Olympic Committee’s Athletes Advisory Council. She would testify before the Senate to support the Amateur Sports Act of 1978, which reworked how Olympic sports were governed in the United States. In order to prepare for the 1980 Olympics, DeFrantz took a leave of absence from her job at a public interest law firm in Philadelphia. She was horrified when, in January 1980, President Jimmy Carter spoke out against U.S. participation in the Olympics in the Soviet Union, following that country’s invasion of Afghanistan. After failing to persuade

the USOC to reject Carter’s request, DeFrantz was a plaintiff in an unsuccessful lawsuit challenging the boycott. These efforts made DeFrantz unpopular with some, including individuals who sent her hate mail. However, she was also awarded the Bronze Medal of the Olympic Order for her support of the 1980 Olympic Games.

DeFrantz would not be ostracized by the USOC for her challenge to the boycott. She was hired by Peter Ueberroth as a vice president of the 1984 Olympic Games in Los Angeles, where she served as chief administrator for the Olympic Village. When she was elected to the IOC in 1986, she was selected over Ueberroth, who was the commissioner of Major League Baseball at the time, and swimming champion/sports reporter Donna de Varona. This made DeFrantz just the fifth woman on the 93-member IOC, as well as the first African American and first American woman on the committee. The appointment is for life and makes DeFrantz a voting member until she is 75. In 1997 she became the organization’s first female vice president, a position she held until 2001.

While she serves on the boards of several organizations, one of DeFrantz’s larger responsibilities is serving as president and board member of the Amateur Athletic Foundation of Los Angeles (AAFLA). The Los Angeles Olympic Games had a $230 million profit, from which $93 million went to form the AAFLA. The foundation grants funds to youth sports organizations and has created the largest sports library in North America. At the same time, DeFrantz’s work with the IOC and USOC has made her an important figure in Olympic planning and management for nearly two decades. For the 1992 games in Barcelona, she was in charge of the Olympic Village housing project and served on the program and eligibility commissions. She would later be part of the Atlanta Committee for the Olympic Games and the Salt Lake City Olympic Organizing Committee.

Throughout her work, DeFrantz has tried to create gender equity for female athletes and sports managers. She helped put women’s soccer and softball in the Olympics and led the way in creating an IOC policy requiring that women make up at least ten percent of the board and national Olympic committees. In 2001, with the endorsement of the USOC, she sought to become the first female and black president of the IOC. Despite being arguably the most influential female administrator in sports, DeFrantz was considered a long shot and was eliminated in the first round of voting. News reports explained that she lost votes because some members wanted to block the election of controversial candidate Kim Un-Yong of South Korea, who was said to have been shopping for votes. Jacques Rogge of Belgium was elected to replace Juan Antonio Samaranch as president.

Having begun her involvement in sports in rowing, a field dominated by whites, and then making an unpopular challenge to the U.S. boycott of the 1980 Olympics, Anita DeFrantz started her career as an outsider. She has since been highly successful in advancing the rights of all athletes and widening opportunities for children, women, and minorities in sports. Although she has sought to upset the status quo in sports, DeFrantz has been happy working within some of the oldest and most tradition-bound institutions. As a member of the IOC and the USOC, as well as many other sports organizations, she has been involved in a staggering number of athletic events and a wide range of policy developments. Her achievements make her a pioneer among American women and African Americans.