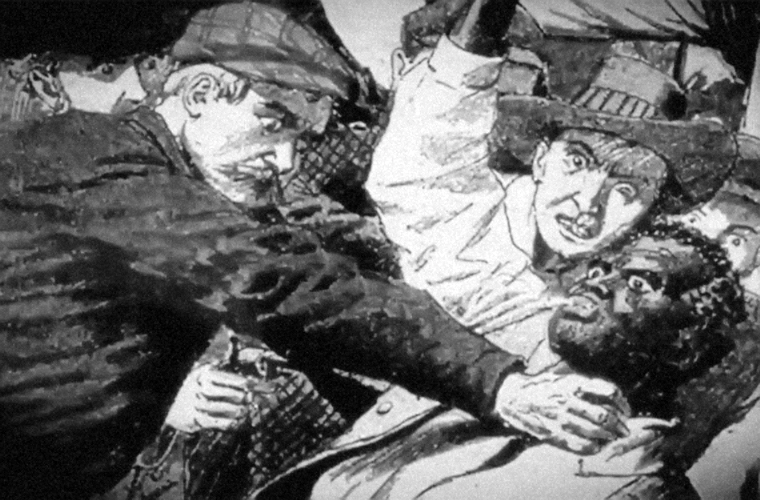 During the Atlanta race riot that occurred September 22-24, 1906, white mobs killed dozens of Black Georgians, wounded scores of others, and inflicted considerable property damage. Local newspaper reports of alleged assaults by Black men on white women were the catalyst for the riot, but a number of underlying causes lay behind the outbreak of the mob violence.

Causes of the Riot
By the 1880s Atlanta had become the hub of the regional economy, and the city’s overall population soared from 89,000 in 1900 to 150,000 in 1910; the Black population was approximately 9,000 in 1880 and 35,000 by 1900. Such growth put pressure on municipal services, increased job competition among Black and white workers, heightened class distinctions, and led the city’s white leadership to respond with restrictions intended to control the daily behavior of the growing working class, with mixed success. Such conditions caused concern among elite whites, who feared the social intermingling of the races, and led to an expansion of Jim Crow segregation, particularly in the separation of white and Black neighborhoods and separate seating areas for public transportation.

The emergence during this time of a Black elite in Atlanta also contributed to racial tensions in the city. During Reconstruction (1867-76), Black men were given the right to vote, and as Blacks became more involved in the political realm, they began to establish businesses, create social networks, and build communities. As this Black elite acquired wealth, education, and prestige, its members attempted to distance themselves from an affiliation with the Black working class, and especially from the unemployed Black men who frequented the saloons on Atlanta’s Decatur Street. Many whites, while uncomfortable with the advances of the Black elite, also disapproved of these saloons, which were said to be decorated with depictions of nude women. Concern over such establishments fueled prohibition advocates in the city, and many whites began to blame Black saloon-goers for rising crime rates in the growing city, and particularly for threats of sexual violence against white women.

The candidates for the 1906 governor’s race played to white fears of a Black upper class. In the months leading up to the August election, both Hoke Smith, the former publisher of the Atlanta Journal, and Clark Howell, the editor of the Atlanta Constitution, were in the position as gubernatorial candidates to influence public opinion through their newspapers. Smith, with the public support of former Populist Thomas E. Watson, inflamed racial tensions in Atlanta by insisting that Black disenfranchisement was necessary to ensure that Blacks were kept “in their place”; that is, in a position inferior to that of whites. Since receiving the right to vote, Smith argued, Blacks also had sought economic and social equality. By disenfranchising Blacks, whites could maintain the social order. Howell, on the other hand, claimed that the Democratic white primary and the poll tax were already sufficient in limiting Black voting. Instead, Howell emphasized that Smith was not the racial separatist he claimed to be, and he charged that Smith had in the past cooperated with Black political leaders and thus could not be relied upon to advance the cause of white supremacy.

In addition to the political debates waged in the Journal and the Constitution, other newspapers, especially the Atlanta Georgian and the Atlanta News, carried stories throughout the year about alleged assaults on white women by Black men. The media provoked anger and hatred in its white readers—with stories, editorials, and cartoons warning of rising crime, the danger to white women of rape by Black men, the disreputable saloons that encouraged drunkenness and licentious behavior in “brutish” men, and the desire of “uppity” Blacks to achieve equality with whites. By late September, after newspaper reports of four separate incidences of alleged assaults by Blacks on white women circulated in Atlanta, mob violence erupted.

The Riot
On the afternoon of Saturday, September 22, Atlanta newspapers reported four alleged assaults, none of which were ever substantiated, upon local white women. Extra editions of these accounts, sensationalized with lurid details and inflammatory language intended to inspire fear if not revenge, circulated, and soon thousands of white men and boys gathered in downtown Atlanta. City leaders, including Mayor James G. Woodward, sought to calm the increasingly indignant crowds but failed to do so. By early evening, the crowd had become a mob; from then until after midnight, they surged down Decatur Street, Pryor Street, Central Avenue, and throughout the central business district, assaulting hundreds of Blacks. The mob attacked Black-owned businesses, smashing the windows of Black leader Alonzo Herndon’s barbershop. Although Herndon had closed down early and was already at home when his shop was damaged, another barbershop across the street was raided by the rioters—and the barbers were killed. The crowd also attacked streetcars, entering trolley cars and beating Black men and women; at least three men were beaten to death.

Finally, the militia was summoned around midnight, and streetcar service was suspended. The mob showed no signs of letting up, however, and the crowd was dispersed only once a heavy rain began to fall around 2:00 a.m. Atlanta was then under the control of the state militia.

On Sunday, September 23, the Atlanta newspapers reported that the state militia had been mustered to control the mob; they also reported that Blacks were no longer a problem for whites because Saturday night’s violence had driven them off public streets. While the police, armed with rifles, and militia patrolled the streets and key landmarks and guarded white property, Blacks secretly obtained weapons to arm themselves against the mob, fearing its return. Despite the presence of law enforcement, white vigilante groups invaded some Black neighborhoods. In some areas, African Americans defended their homes and were able to turn away the incursions into their communities. (One person who described such activity was Walter White, who experienced the riot as a young boy. The incident was a defining moment for White, who went on to become secretary of the National Association for the Advancement of Colored People [NAACP], and he later described the event in his 1948 memoir A Man Called White.)

On Monday, September 24, a group of African Americans held a meeting in Brownsville, a community located about two miles south of downtown Atlanta and home to the historically Black Clark College (later Clark Atlanta University) and Gammon Theological Seminary. The group was heavily armed. When Fulton County police learned of the gathering, they feared a counterattack and launched a raid on Brownsville. A shootout ensued, and an officer was killed. In response, three companies of heavily armed militia were sent to Brownsville, where they seized weapons and arrested more than 250 African American men. Meanwhile, sporadic fighting continued throughout the day.

Aftermath
On Monday and Tuesday, city officials, businessmen, clergy, and the press called for an end it was damaging Atlanta’s image as a thriving New South city. Indeed, the riot had been covered throughout the United States as well as internationally. Fears of continued disorder prompted some white civic leaders to seek a dialogue with Black elites, establishing a rare biracial tradition that convinced mainstream northern whites that racial reconciliation was possible in the South without national intervention. Paired with Black fears of renewed violence, however, this interracial cooperation exacerbated Black social divisions as the Black elite sought to distance itself from the lower class and its interests, leaving the city among the most segregated and socially stratified in the nation.

Newspaper accounts at the time and subsequent scholarly treatments of the riot vary widely on the number of casualties. Estimates range from twenty-five to forty African American deaths, although the city coroner issued only ten death certificates for Black victims. Most accounts agree that only two whites were killed, one of whom was a woman who suffered a heart attack on seeing the mob outside her home.

There were other consequences of the riot as well, both locally and nationally. Its aftermath saw a depression of Atlanta’s Black community and economy. The riot contributed to the passage of statewide prohibition and Black suffrage restriction by 1908. It discredited for many Black leaders the accommodationist strategy of Booker T. Washington among the leadership of Black America and gave new legitimacy to the more aggressive tactics for achieving racial justice epitomized by W. E. B. Du Bois, who wrote a powerful poem, “The Litany of Atlanta,” in the riot’s wake. Although it had a profound effect on many of those who experienced it, the riot was forgotten or minimized for decades in the white community and ignored in the official histories of the city.