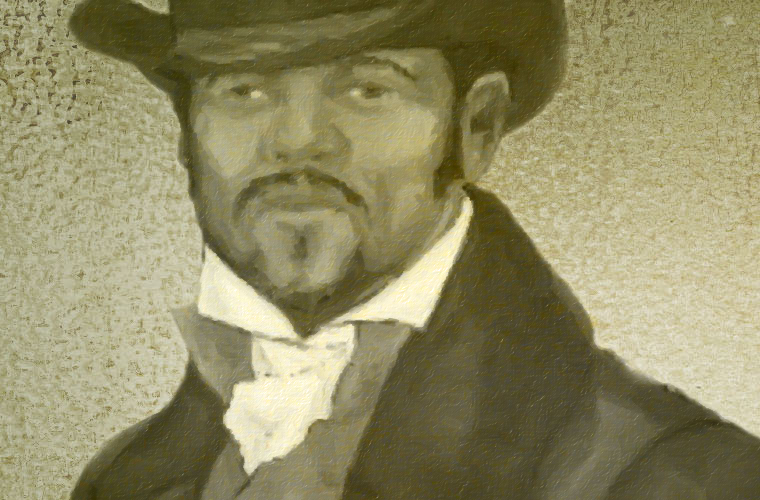 Greenbury Logan (ca. 1798–ca. 1868). Greenbury (Greenberry) Logan, a free black and soldier who fought in the Texas Revolution, was born into slavery about 1798 in Kentucky. He was emancipated by his white father, David Logan, and emigrated from Missouri to Texas in February 1831 to settle in Stephen F. Austin’s third colony. Logan was thirty-three years old when he arrived in Texas with his twenty-five-year-old wife Judah Duncan (ca. 1806–ca. 1832) and their five children. He obtained a Mexican land grant for a quarter of a league of land on Chocolate Bayou on December 22, 1831, in present-day Brazoria County and established himself as a blacksmith. Logan’s wife, Judah, and possibly all of their children apparently died shortly after their arrival. In 1832 Logan purchased a slave woman, Caroline Williamson (ca. 1802–ca. 1881), manumitted her, and then married her on December 30, 1833, in Brazoria County. It appears the couple had no children since none were listed with them on the 1850 census.  Furthermore, a petition filed by Caroline Logan in the 1870s indicated she was Greenbury Logan’s only heir, with the exception of Margaret J. Bergstrom (spelled Bergestone in the 1850 census), the orphan of a Swedish immigrant, whom the Logans adopted.

Logan, along with approximately 400 other free blacks who had entered Texas by the mid-1830s, were afforded full citizenship rights by the Mexican government. Mexican law did not prohibit interracial marriages and made the territory attractive to mixed-race couples who wished to legalize their relationships. Despite the egalitarian environment of his newly-adopted country, Logan sided with the Texas colonists when conflict arose with the Mexican government.

Logan served at the battle of Velasco on June 26, 1832, and later, in 1835, answered the call for volunteers to march to Bexar. He joined Capt. James Walker Fannin’s company as a private in the middle of October and was with a detachment of approximately ninety men from Stephen F. Austin’s main force when they defeated a larger Mexican force near Mission Concepción on October 28, 1835. At the siege of Bexar, while he served in Capt. John York’s company, Logan volunteered to storm the works. He was wounded on December 5, 1835, the first day of action, when a ball passed through his right arm. Having “almost entirely lost the use of his right arm,” Logan was commended by the Texas legislature, which praised his conduct by declaring he had served “with distinguished alacrity.” At the age of thirty-eight, he was discharged from the army and opened a boarding house, tavern, and retail store in Brazoria with his wife.

The country’s regard for its black patriots was short-lived. On January 5, 1836, the Texas legislature prohibited blacks from entering the state, while granting temporary residency to those already there. Soon thereafter, the new constitution for the Republic of Texas was adopted and prohibited any person of color from residing in the Republic without the consent of the legislature. On May 15, 1837, Logan petitioned the Texas Congress and stated that he “had hoped that after the zeal and patriotism” he had shown in “fighting for the liberty of his adopted Country,” he might be allowed to spend “the remainder of his days in quiet and peace,” but understood the constitution would not allow him to do so without the consent of the legislature.  Acting upon his petition, the legislature recommended that Logan and his wife Caroline be “authorized to remain permanently and enjoy all the rights, privileges, and immunities of free Citizens.”

In June 1838, Logan received a bounty warrant for 320 acres for his service from October 4, 1835, to December 23, 1835, and a donation certificate for 640 acres for his service during the siege of Bexar. Logan penned a letter to his congressman, Robert Forbes, on November 22, 1841, informing him that he was in every fight during the campaign of 1835 and was the third man that fell when Bexar was taken. Logan complained to Forbes of his ill-treatment by the government and that the constitution deprived him of “every privileged to a freeman…no vote or say in any way.” Finding himself in an impoverished state, he sought a pension, in the form of a remission of taxes, in order to retain his property.

In 1860 Logan, his wife, and their adopted daughter Margaret were listed on the federal census as living in Fort Bend County. He was listed as a blacksmith with real estate valued at $2,500 and a personal estate valued at $3,000. His name was listed on Fort Bend County tax rolls in 1866. Greenbury Logan passed away about 1868, according to some genealogy sources, but the exact year of his death is unclear. He never attained the level of freedom he had enjoyed under Mexican rule some thirty years earlier. His frustration was evident in his petition to the legislature, just two short years after he had “shed his blood in a cause so glorious,” when he was forced to plead with the legislature for the “privileges” of remaining in Texas. His widow, Caroline, lived out the remainder of her years with her adopted daughter, Margaret, who married William A. Taylor, in Fort Bend County, Texas, on September 10, 1863. On July 21, 1881, Caroline Logan received her last allotment of land for her husband’s service, 1,280 acres, which she sold the following month.