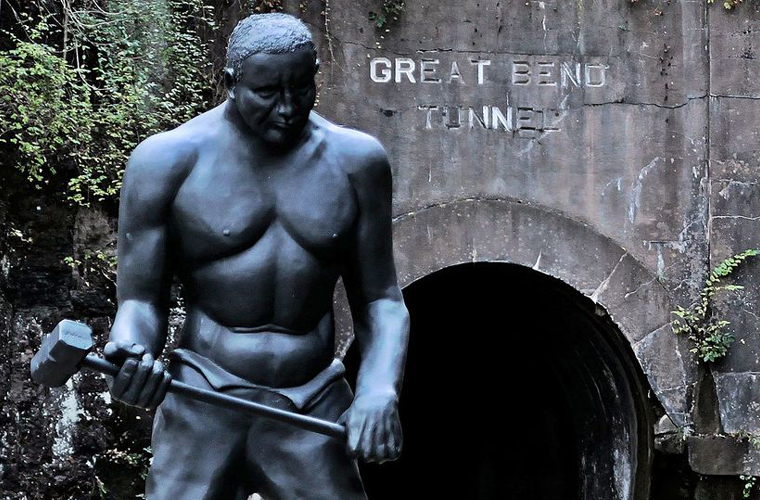 John Henryism (JH), a psychological construct formally proposed in 1983 by Sherman James and colleagues (James et al. 1983), is defined as a “strong behavioral predisposition to cope actively with psychosocial environmental stressors”. JH is characterized by three factors: efficacious mental and physical vigor; a strong commitment to hard work; and a single-minded determination to succeed. James and colleagues hypothesized that for persons lacking sufficient socioeconomic resources, active coping (i.e., sustained cognitive and emotional engagement—in other words, prolonged determination to succeed) with persistent psychosocial and environmental stressors may increase the risk of negative health outcomes.

JH takes its name and is inspired in part by the story of John Henry, the fabled “steel-driving man.” According to legend, John Henry was an uneducated black steel driver who participated in a competition with a mechanical steam-powered drill. Though he rallied the physical strength needed to win the competition, he died soon after from overwhelming mental and physical fatigue. For James, the story of John Henry was a metaphor for the empirical literature that links active coping with psychosocial stress to dysregulation of the sympathetic nervous system (which may heighten blood pressure and hypertension risk).

James and his colleagues conducted a number of cross-sectional investigations of the JH hypothesis in then-rural North Carolina. The initial 1983 study of 132 working-class black men aged seventeen to sixty years demonstrated that black men with low education and high JH had higher mean diastolic blood pressure than other subgroups, though the difference was not statistically significant. However, in their 1984 follow-up study, James and his colleagues found a significant interaction between JH and perceived job success in the prediction of diastolic blood pressure among 112 black male workers. In 1987, James et al. recruited a sample of 820 black and white men and women aged twenty-one to fifty years, and found that blacks with high JH and low socioeconomic status (SES) were almost three times as likely to be hypertensive, compared to blacks of high socioeconomic position; no similar relationship was found among whites.

James’s group focused their 1992 study on a much larger sample of African Americans from an eastern North Carolina county that was more urbanized and socioeconomically diverse than the areas in their previous studies. When the traditional JH hypothesis—high JH and low SES constitutes risk—was not supported, James posited that high JH should only be deleterious for those of lower SES who also have high levels of perceived stress. Indeed, post hoc analyses revealed significantly elevated blood pressure levels among those with high JH and low SES, but only for those who also reported high levels of perceived stress.

In addition to James’s early work, a number of other studies have investigated the JH hypothesis in sociodemographically diverse samples, with a wide array of health outcomes. Results from these studies have been mixed. For example, Lynda Wright and colleagues (1996) demonstrated that high JH scores were associated with higher resting blood pressure, higher total peripheral resistance, and lower cardiac index among 173 healthy white and black children aged ten to seventeen. William Wiist and John Flack (1992) found that high JH and low SES participants were significantly more likely to have higher cholesterol levels (240 mg/dl). In a sample of 600 African American men and women, William Dressler and colleagues (1998) found an interaction between gender and John Henryism such that for men, higher JH was associated with increased systolic blood pressure and hypertension risk, whereas elevated JH was associated with lower blood pressure and hypertension risk among women.

Despite these and other positive findings, a number of studies have failed to support the traditional JH hypothesis. To illustrate, Linda Jackson and Lucile Adams-Campbell (1994), found no JH effect on blood pressure among urban black college students. A study of 658 Nigerian civil servants yielded a nonsignificant trend for higher blood pressure among those with high levels of both JH and socioeconomic status (Markovic et al. 1998). Anita Fernander and colleagues (2005) found that participants with low education who had low JH reported higher nicotine dependence scores, compared to any other subgroup. Finally, Vence Bonham and colleagues (2004) found that better self-reported physical health among a sample of high socioeconomic-position African American men was marginally associated with high John Henryism.

Methodological inconsistencies as well as differences in the sociodemographic composition of study samples may partly explain these mixed findings. For example, although JH originally was thought to constitute a risk in the context of lower socioeconomic position, a number of studies have studied JH as an independent risk factor (i.e., without modeling the JH x SES interaction). Most studies investigating JH independently have shown no association with the studied health outcomes. Certainly, there is controversy regarding the most appropriate measures of SES, though there is consensus that the definition varies by population. A wide variety of socioeconomic indicators have been studied in association with JH, but no clear pattern has emerged. A largely unresolved issue concerns whether JH is most predictive in specifically socially disadvantaged populations, or whether it is more widely occurring.

Those researching the JH construct have examined a range of health outcomes, but have been primarily focused on cardiovascular parameters (particularly blood pressure). Other outcomes with positive findings include cholesterol, cigarette smoking, pain susceptibility, and stress-related illness. JH research has been conducted with various samples (e.g., older populations, high school, and college students, clinical samples) of various racial-ethnic, socioeconomic, and geographic compositions. Though support for the JH hypothesis was originally found among populations in the American southeast, the construct has been widely investigated in a range of populations throughout the United States and in European and African countries, and in both urban and rural settings.

A growing area of JH research concerns the role of JH in predicting the adoption of adverse health behaviors (including smoking, alcohol dependence, and stress-related eating). A new body of work uses JH in the clinical realm to learn more about the health effects of high-effort coping among those with chronic illness. A recent study has estimated the proportion of JH behaviors that are inherited (Whitfield et al. 2006). The JH literature proposes a novel and compelling hypothesis for understanding the promotion of disparities in a number of key health outcomes. The body of evidence investigating JH is replete with areas for additional inquiry, thus ensuring that JH research will continue.