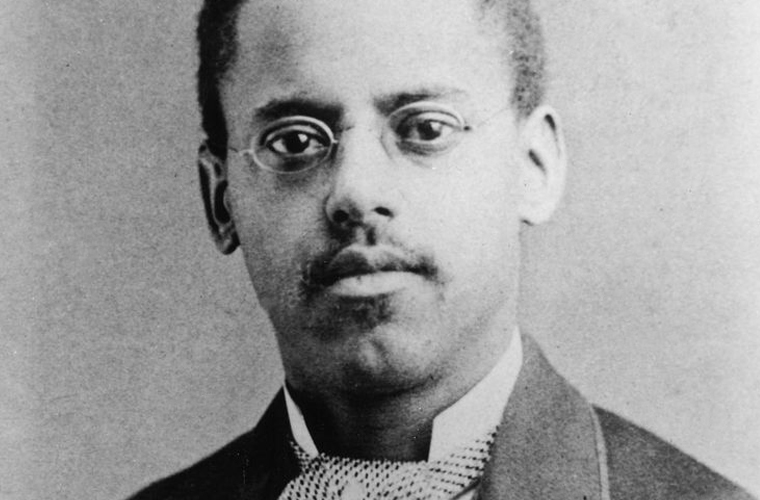 Inventor and engineer Lewis Howard Latimer was born to parents who had fled slavery. Latimer learned the art of mechanical drawing while working at a patent firm. Over the course of his career as a draftsman, Latimer worked closely with Thomas Edison and Alexander Graham Bell, in addition to designing his own inventions.

Latimer was born in Chelsea, Massachusetts, on September 4, 1848. Latimer was the youngest of four children born to George and Rebecca Latimer, who had escaped from slavery in Virginia six years before his birth. Captured in Boston and brought to trial as a fugitive, George Latimer was defended by abolitionists Frederick Douglass and William Lloyd Garrison. He was eventually able to purchase his freedom, with the help of a local minister, and began raising a family with Rebecca in nearby Chelsea. George disappeared shortly after the Dred Scott decision in 1857, possibly fearing a return to slavery and the South.
Helping to Patent the Telephone and Light Bulb

After his father’s departure, Latimer worked to help support his mother and family. In 1864, at the age of 16, Latimer lied about his age in order to enlist in the United States Navy during the Civil War. Returning to Boston after an honorable discharge, he accepted a menial position at the Crosby and Gould patent law office. He taught himself mechanical drawing and drafting by observing the work of draftsmen at the firm. Recognizing Latimer’s talent and promise, the firm partners promoted him from office boy to draftsman. In addition to assisting others, Latimer designed a number of his own inventions, including an improved railroad car bathroom and an early air conditioning unit.

Latimer’s talents were well-matched to the post-Civil War period, which saw a large number of scientific and engineering breakthroughs. Latimer was directly involved with one of these inventions: the telephone. Working with Bell, Latimer helped draft the patent for Bell’s design of the telephone. He was also involved in the field of incandescent lighting, a particularly competitive field, working for Hiram Maxim and Edison.
Latimer’s deep knowledge of both patents and electrical engineering made Latimer an indispensable partner to Edison as he promoted and defended his light bulb design. In 1890, Latimer published a book entitled Incandescent Electric Lighting: A Practical Description of the Edison System. He continued to work as a patent consultant until 1922.

Latimer married Mary Wilson in 1873, and they had two daughters together. The Latimers were active members of the Unitarian Church and Latimer was consistently involved in Civil War veterans groups, including the Grand Army of the Republic. In addition to his drafting skills, Latimer enjoyed other creative pastimes, including playing the flute and writing poetry and plays. In his spare time, he taught mechanical drawing and English to recent immigrants at the Henry Street Settlement in New York.