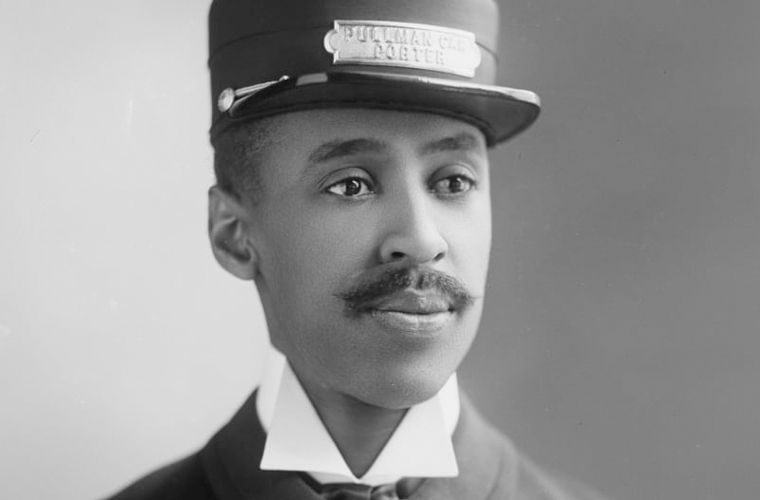 Just a few years after the Civil War, the Chicago businessman George M. Pullman began hiring thousands of African-American men—including many former slaves—to serve white passengers traveling across the country on his company’s luxury railroad sleeping cars. While they were underpaid and overworked and endured constant racism on the job, the Pullman porters would eventually help to fuel the Great Migration, shape a new black middle class, and launch the civil rights movement.

Rise of the Pullman Palace Car Company
In 1859, as the railroads were expanding their reach across America, Pullman convinced the Chicago, Alton, and St. Louis Railroad to let him convert two old passenger cars into new and improved sleepers. These more comfortable, luxurious sleeping cars were an instant hit, affording wealthier passengers the amenities they were accustomed to at home and allowing middle-class travelers to enjoy a taste of the good life.

The first Pullman porter began working aboard the sleeper cars around 1867, and quickly became a fixture of the company’s sought-after traveling experience. Just as all of his specially trained conductors were white, Pullman recruited only black men, many of them from the former slave states in the South, to work as porters. Their job was to lug baggage, shine shoes, set up and clean the sleeping berths and serve passengers.

The Perfect Servants
George Pullman was open about his reasons for hiring Negro porters: He reasoned that former slaves would know best how to cater to his customers’ every whim, and they would work long hours for cheap wages. He also thought that black porters (especially those with darker skin) would be more invisible to his white upper- and middle-class passengers, making it easier for them to feel comfortable during their journey.

“He was looking for people who had been trained to be the perfect servant,” the historian Larry Tye, author of Rising from the Rails: Pullman Porters and the Making of the Black Middle Class, told NPR in 2009. “He knew they would come cheap, and he paid them next to nothing. And he knew there was never a question off the train that you would be embarrassed by running into one of these Pullman porters.”

But despite the undeniable racism behind Pullman’s employment practices, he ended up giving advantages to people who desperately needed them. In the early 1900s, a time when many other businesses wouldn’t hire African Americans, the Pullman Company became the largest single employer of black men in the country.

The Life of a Pullman Porter
Working as a Pullman porter became a coveted job, even a career and many brothers, sons, and grandsons of porters followed in their footsteps. Porters were paid more than what many other black workers made at the time, and the work was not backbreaking when compared to field labor. More importantly, they got to travel the country, at a time when this was unthinkable for the vast majority of black Americans.

As Pullman porters became famous for their superior service, many former porters moved on to jobs at fine hotels and restaurants, and some even moved up to the White House. Porter J.W. Mays first-served President William McKinley in his sleeping car; he would later spend more than four decades in the White House, serving McKinley and the eight presidents who followed him.

But, along with the opportunities they enjoyed, Pullman porters undoubtedly had to put up with a good deal of prejudice and disrespect. Many passengers called porters “boy” or “George,” after George Pullman, regardless of their real names. This was an uncomfortable throwback to slavery when slaves were named after their owners.

Pullman porters often worked 400 hours a month, with little time off. While their salaries were envied in the black community, they were among the worst-paid of all train employees. Tipping was built into the pay structure, which saved the company money but encouraged porters to solicit tips, fueling their later reputation as grinning “Uncle Toms” who exaggerated their servitude to increase their tips.

Porters Form First All-Black Union
By the mid-1890s, the American Railway Union had organized most Pullman employees but refused to include black workers, including porters. Formed in 1925, the Brotherhood of Sleeping Car Porters (BSCP) was organized by A. Philip Randolph, the social activist, and publisher of the political and literary magazine The Messenger.

Due to strong opposition by the Pullman Company, Randolph and the BSCP had to fight for more than a decade before securing their first collective bargaining agreement—and the first-ever agreement between a union of black workers and a major U.S. company—in 1937. In addition to a big wage hike for porters, the agreement set a limit of 240 working hours a month.

Randolph and other BSCP figures would go on to play key roles in the civil rights movement, helping to influence public policy in Washington D.C. which ultimately led to the passage of the 1964 Civil Rights Act. Edgar D. Nixon, a Pullman porter, and leader of the local BSCP chapter in Montgomery, Alabama, was instrumental in starting the bus boycott in that city following Rosa Parks’ arrest in December 1955. Because he was often out of town working as a porter, Nixon enlisted a young minister, Martin Luther King Jr., to organize the boycott in his absence.

Pullman Porters Legacy
While the mid-1920s marked the high point of business for the Pullman Company, the emergence of the automobile and the airplane as alternative modes of transport cut significantly into the railroad business over the decades that followed. By the 1950s, passenger train service was on the decline, and in 1969 the Pullman Company ended its sleeping car service.

By then, however, the impact of Pullman porters had stretched far beyond the railroad, with lasting economic, social, and cultural effects. From the beginning, porters had served as change agents for their communities, carrying new musical forms (jazz and the blues, for example) and new radical ideas from urban centers to rural areas, and from North to South. Their influence undoubtedly helped fuel the Great Migration, during which some 6 million African Americans relocated from the South to urban regions of the North and West.

By viewing the lives of wealthier white Americans up close, Pullman porters were able to see clearly the differences between these lives and their own. Armed with this knowledge, many porters saved up money to send their children and grandchildren through college and graduate school, giving them the education and opportunities they hadn’t had themselves.