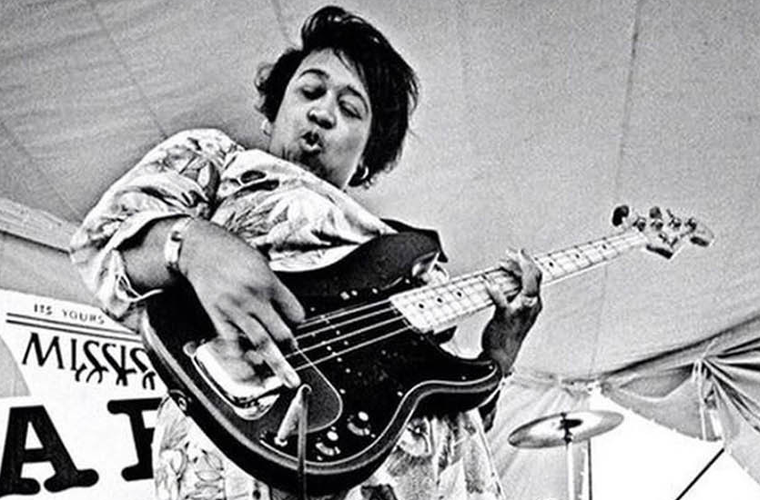 For a period of time in the ‘70s and ‘80s, it appeared that Queen Sylvia Embry was going to emerge as one of Chicago’s leading blues women. After she emerged from her role as a bass woman for Lefty Dizz and the Shock treatment in the late 1970s, she began fronting her own small band in South Side clubs and making guest appearances on the North Side circuit. Everywhere she went, her big smile, warm stage presence, rich gospel-rooted voice, and solid bass playing won her new fans.

There were (and are) only a few professional-quality instrumentalists among the city’s blues women, and only one other playing bass. “I played piano when I first started out as a kid,” Sylvia recalled, “and I got away from it because my grandmother was very strict. She demanded I play gospel, and I wanted to play a little boogie-woogie. I was crazy about Chuck Berry and Lloyd Price; I didn’t care for blues then. My grandmother and her friends would drink white lightning and play blues records at their little outdoor cookouts, but she didn’t want me to do it.” To please her family, Sylvia sang in church choirs, even in a professional gospel group, The Southern Echoes, while a teenager. But at the age of nineteen, her ambitions grew bigger than the tiny town of Wabbaseka, Arkansas (where she was born in 1941) could hold. “I always wanted to be an actress or a vocalist. So I left home, went to Memphis. But unfortunately, I got married, started to raise a family. I really didn’t trust leaving my home with someone else, so I was mainly a common housewife.”

“I came to Chicago and started going down to Pepper’s at 43rd and Vincennes. That was in the ‘60s. I was separated and divorced. That’s when I met John.” Johnny Embry was one of the city’s fine but unheralded blues guitarists. He and Sylvia were soon married.

“John taught me to play bass after we got married. I kept beggin’ him but he said, ‘You won’t do it; it’s a hard thing.’ But I’m a determined type person. The bass is the only instrument in the band that really fascinated me. Especially when Z.Z. Hill put out this song about “Don’t Make Me Pay For His Mistake.” That bass pattern just knocked me over! And that was the first tune I learned how to play.”

“I worked briefly with John and other people, but nobody really big until I got involved with Lefty Dizz.” Dizz and Sylvia held down the slot as the Blue Monday house band at The Checkerboard for over three years, with Sylvia’s vocals becoming a more and more requested part of the show. The band won a North Side following at Kingston Mines, and gigged all over the South Side. But she was still having trouble in a man’s world. “When I started playing with Dizz,” she recalls, “I really didn’t even know the scales on the bass. But he was nice, he didn’t try to intimidate me. My problem was with other bass players. They would say, ‘You can’t play; stay home and have babies!’”

Finally, at the age of 39, Queen Sylvia stepped out on her own and made her debut recordings for Alligator’s Living Chicago Blues series. “The kids are up and on their own,” she says, “and I can travel.” Razor Records then released an album (now out of print) of John and Sylvia Embry (no longer married, they remained good friends). She then began a professional association with Jimmy “Fast Fingers” Dawkins, the West Side guitarist, with whom she toured Europe and cut an album, now available on the Evidence label.

Unfortunately, Sylvia’s health declined in the 1980s and she died of cancer on Feb. 28, 1992, still not widely known in the blues world.