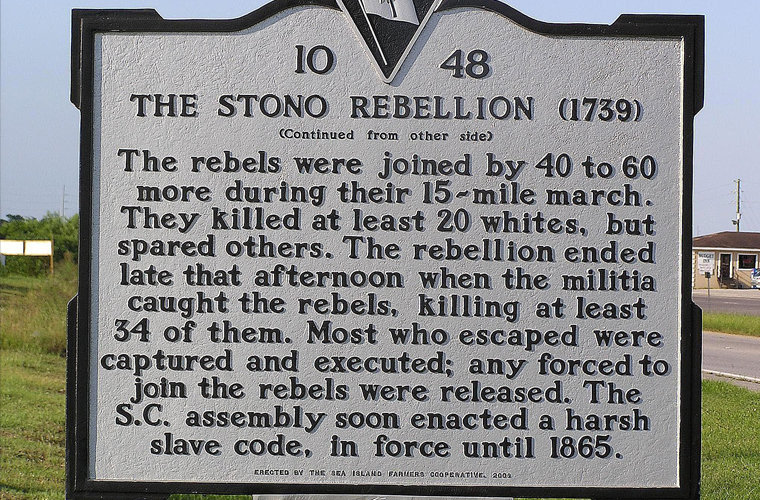 South Carolina, September 9, 1739: A band of slaves march down the road, carrying banners that proclaim “Liberty!”. They shout out the same word. Led by an Angolan named Jemmy, the men and women continue to walk south, recruiting more slaves along the way. By the time they stop to rest for the night, their numbers will have approached one hundred.

What exactly triggered the Stono Rebellion is not clear. Many slaves knew that small groups of runaways had made their way from South Carolina to Florida, where they had been given freedom and land. Looking to cause unrest within the English colonies, the Spanish had issued a proclamation stating that any slave who deserted to St Augustine would be given the same treatment. Certainly, this influenced the potential rebels and made them willing to accept their situation. A fall epidemic had disrupted the colonial government in nearby Charlestown (Charleston), and word had just arrived that England and Spain were at war, raising hopes that the Spanish in St. Augustine would give a positive reception to slaves escaping from Carolina plantations. But what may have actually triggered the rebellion on September 9th was the soon-to-be-enacted Security Act.

In mid-August, a Charlestown newspaper announced the Security Act. A response to the white’s fears of insurrection, the act required that all white men carry firearms to church on Sundays, a time when whites usually didn’t carry weapons and slaves were allowed to work for themselves. Anyone who didn’t comply with the new law by September 29 would be subjected to a fine.

Whatever triggered the Rebellion, early on the morning of the 9th, a Sunday, about twenty slaves gathered near the Stono River in St. Paul’s Parish, less than twenty miles from Charlestown. The slaves went to a shop that sold firearms and ammunition, armed themselves, then killed the two shopkeepers who were manning the shop. From there the band walked to the house of a Mr. Godfrey, where they burned the house and killed Godfrey and his son and daughter. They headed south. It was not yet dawn when they reached Wallace’s Tavern. Because the innkeeper at the tavern was kind to his slaves, his life was spared. The white inhabitants of the next six or so houses they reach were not so lucky — all were killed. The slaves belonging to Thomas Rose successfully hid their master, but they were forced to join the rebellion. (They would later be rewarded. See Report re. Stono Rebellion Slave-Catchers.) Other slaves willingly joined the rebellion. By eleven in the morning, the group was about 50 strong. The few whites whom they now encountered were chased and killed, though one individual, Lieutenant Governor Bull, eluded the rebels and rode to spread the alarm.

The slaves stopped in a large field late that afternoon, just before reaching the Edisto River. They had marched over ten miles and killed between twenty and twenty-five whites.

Around four in the afternoon, somewhere between twenty and 100 whites had set out in armed pursuit. When they approached the rebels, the slaves fired two shots. The whites returned fire, bringing down fourteen of the slaves. By dusk, about thirty slaves were dead and at least thirty had escaped. Most were captured over the next month, then executed; the rest were captured over the following six months — all except one who remained a fugitive for three years.

Uncomfortable with the increasing numbers of blacks for some time, the white colonists had been working on a Negro Act that would limit the privileges of slaves. This act was quickly finalized and approved after the Stono Rebellion. No longer would slaves be allowed to grow their own food, assemble in groups, earn their own money, or learn to read. Some of these restrictions had been in effect before the Negro Act but had not been strictly enforced.