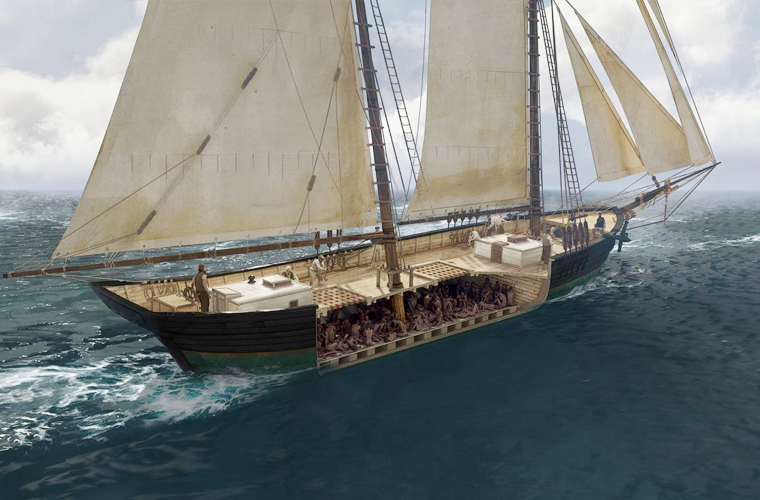 The schooner Clotilda is the last known United States slave ship to bring enslaved people from Africa to the United States. Constructed in 1855 by the Mobile, Alabama captain, and shipbuilder William Foster, the Clotilda was originally intended for the “Texas trade.” It was eighty-sixed feet in length, twenty-three feet in breadth, possessed two masts and one deck, weighed 120 81/91 tons, and though not originally intended for the slave trade, the ship was capable of carrying an estimated 190 people. Foster sold the Clotilda to the prominent Mobile businessman Timothy Meaher for $35,000 in 1860 after being approached by Meaher about commanding an illegal slaving voyage to Ouidah, a port town in Dahomey (today Benin).

In the spring of 1860, the Clotilda was loaded with 125 barrels of water, 25 casks of rice, 30 casks of beef, 40 pounds of pork, 3 barrels of sugar, 25 barrels of flour, 4 barrels of bread, 4 barrels of molasses, 80 casks of rum, 25 casks of “dry goods and sundries,” and $9,000 in gold (today $185,000) intended for the purchase of 125 Africans; these provisions were hidden by stacks of lumber that would later be used to build the planks and platforms for the captives’ “beds.” The ship set sail on the night of March 3, 1860, under the pretense of bringing a cargo of lumber to the Danish Virgin Islands.

Marine archaeologists recovered nails, spikes, and bolts used to secure the ship’s beams and planking. Made of hand-forged iron, such fasteners were common in schooners built-in Mobile in the mid-19th century.

The voyage to Ouidah lasted two and a half months. Foster and the eleven-men crew survived a violent storm and numerous attempted attacks by pirates and ships of other slaving nations.  While briefly docked in Cape Verde for repairs, the crew was told the true purpose of the voyage after they discovered the provisions obviously intended for returning human cargo. On May 15, 1860, the Clotilda arrived at Ouidah. After more than a week of anchoring a mile and a half from shore, the ship set sail for the United States now loaded with 110 African captives.

A bust of Cudjo Lewis, one of the last Clotilda survivors to pass away, sits at the entrance of Union Missionary Baptist Church, which he helped found.

The Africans were confined in complete darkness below the deck for thirteen days. After this initial period, the captives spent the majority of the journey above deck. Though no sicknesses or deaths were reported during the forty-five-day return voyage, the Africans, who were later interviewed about their experiences on the Clotilda, recounted the twice-daily meager sip of vinegar-treated water they were allowed and the general hardships they suffered.

On July 8, 1960, the Clotilda entered the Mississippi Sound, anchored off Point-of-Pines in Grand Bay, and waited for nightfall. Under the cover of darkness, the ship was clandestinely tugged up the Mobile River to Twelve-Mile Island. Here, the Africans were transported to a second ship, the Czar, and sent further upriver to be surreptitiously transferred to their respective new owners. The Clotilda, now empty and reeking of the stenches indicative of a slave voyage, was set afire by William Foster, though later he claimed to have sold the ship for $6,000.

The Old Plateau Cemetery—also known as the Africatown Cemetery—became the final resting place for many Clotilda survivors who settled the community, including Lewis.