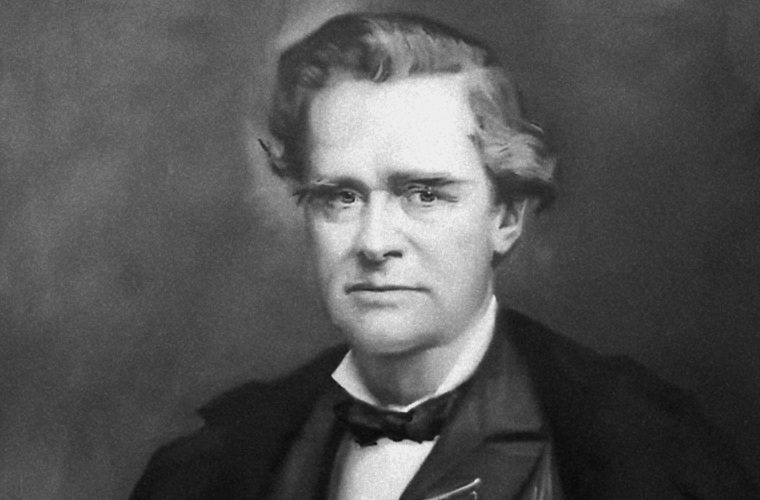 Few medical doctors have been as lauded—and loathed—as James Marion Sims.
Credited as the “father of modern gynecology,” Sims developed pioneering tools and surgical techniques related to women’s reproductive health. In 1876, he was named president of the American Medical Association, and in 1880, he became president of the American Gynecological Society, an organization he helped found. The 19th-century physician has been lionized with a half-dozen statues around the country.

But because Sims’ research was conducted on enslaved Black women without anesthesia, medical ethicists, historians, and others say his use of enslaved Black bodies as medical test subjects falls into a long, ethically bereft history that includes the Tuskegee syphilis experiment and Henrietta Lacks. Critics say Sims cared more about the experiments than in providing therapeutic treatment, and that he caused untold suffering by operating under the racist notion that Black people did not feel pain.

Sims, who practiced medicine at a time when treating women was considered distasteful and rarely done, invented the vaginal speculum, a tool used for dilation and examination. He also pioneered a surgical technique to repair vesicovaginal fistula, a common 19th-century complication of childbirth in which a tear between the uterus and bladder caused constant pain and urine leakage.

His defenders say the Southern-born slaveholder was simply a man of his time for whom the end justified the means—and that enslaved women with fistulas were likely to have wanted the treatment badly enough that they would have agreed to take part in his experiments. But history hasn’t recorded their voices, and consent from their owners, who had a strong financial interest in their recovery, was the only legal requirement of the time.

Roots in the Market for Enslaved People
Born in Lancaster County, South Carolina in 1813, James Marion Sims entered the medical profession when doctors didn’t undergo the same rigorous coursework and training they do today. After interning with a doctor, taking a three-month course, and studying for a year at Jefferson Medical College, Sims began his practice in Lancaster. He later relocated to Montgomery, Alabama, seeking a fresh start after the death of his first two patients.

It was in Montgomery that Sims built his reputation among rich, white plantation owners by treating their enslaved workers. According to Vanessa Gamble, university professor of medical humanities at George Washington University, Sims’s practice was deeply rooted in the trade for enslaved people. Sims built an eight-person hospital in the heart of the trading district in Montgomery. While most healthcare took place on the plantations, some stubborn cases were brought to physicians like Sims, who patched up enslaved workers so they could produce—and reproduce—for their masters again. Otherwise, they were useless to their owners.

“This brings up the concept of ‘soundness.’ ” says Gamble. Being “sound” meant “they produce (for men and women) and reproduce (for women). For these women having this fistula made them less sound.”

Like most doctors in the 19th century, Sims originally had little interest in treating female patients—and no specific gynecological training. Indeed, examining and treating female organs was widely considered offensive and unsavory. But his interest in treating women changed when he was asked to help a patient who had fallen off a horse and was suffering from pelvic and back pain.

To treat this woman’s injury, Sims realized he needed to look directly into her vagina. He positioned her on all fours, leaning forward, and then used his fingers to help him see inside. This discovery helped him develop the precursor to the modern speculum: the bent handle of a pewter spoon.

From his examination, Sims could see that the patient had a vesicovaginal fistula. With no known cure for the ailment, Sims began experimenting in 1845 with surgical techniques to treat such fistulas. If the patients’ owners provided clothing and paid taxes, Sims effectively took temporary ownership of the women until their treatment was completed. He later reflected in his autobiography The Story of My Life on the advantages he found to work on people that were essentially his property: “There was never a time that I could not, at any day, have had a subject for operation.” According to Sims, this was the most “memorable time” of his life.

But Did His Enslaved Patients Consent?
Sims wrote that the women had “clamored” for the operations to relieve their discomfort—but whether they consented or not was never captured in any other historical record. As Bettina Judd, assistant professor of gender, women, and sexuality studies at the University of Washington, points out, consent isn’t always about “whether you can say yes; it’s also whether you can say no.”

Today, we know three of the names of the female fistula patients from Sims’s owns records—Lucy, Anarcha, and Betsey. The first one he operated on was 18-year-old Lucy, who had given birth a few months prior and hadn’t been able to control her bladder since. During the procedure, patients were completely naked and asked to perch on their knees and bend forward onto their elbows so their heads resting on their hands. Lucy endured an hour-long surgery, screaming and crying out in pain, as nearly a dozen other doctors watched. As Sims later wrote, “Lucy’s agony was extreme.” She became extremely ill due to his controversial use of a sponge to drain the urine away from the bladder, which led her to contract blood poisoning. “I thought she was going to die… It took Lucy two or three months to recover entirely from the effects of the operation,” he wrote.

For a long time, Sims’ fistula surgeries were not successful. After 30 operations on one woman, a 17-year-old enslaved woman named Anarcha who had had a very traumatic labor and delivery, he finally “perfected” his method—after four years of experimentation. Afterward, he began to practice on white women, using anesthesia, which was new to the medical field at the time.

While some doctors didn’t trust anesthesia, Sims’ decision to not use it—or any other numbing technique—was based on his misguided belief that Black people didn’t experience pain as white people did. It’s a notion that persists today, according to a study conducted at the University of Virginia, and published in the April 4, 2016 Proceedings of the National Academy of Sciences.

Experimenting on Enslaved Children
Writer and medical ethicist Harriet Washington says Sims’s racist beliefs affected more than his gynecological experiments. Before and after his gynecological experiments, he also tested surgical treatments on enslaved Black children in an effort to treat “trismus nascentium” (neonatal tetanus)—with little to no success. Sims also believed that African Americans were less intelligent than white people, and thought it was because their skulls grew too quickly around their brains. He would operate on African American children using a shoemaker’s tool to pry their bones apart and loosen their skulls.

In the 1850s, Sims moved to New York and opened the first-ever Woman’s Hospital, where he continued testing controversial medical treatments on his patients. When any of Sims’s patients died, the blame, according to him, lay squarely with “the sloth and ignorance of their mothers and the Black midwives who attended them.” He did not believe anything was wrong with his methods.

Sims’ practices ignited controversy during his lifetime, says Washington. The medical community debated his methods, and some of his white colleagues even openly objected to his experiments, saying he took things too far.

Statues Have Prompted Protest
J. Marion Sims continues to loom large in the medical field, celebrated as a medical trailblazer. Statues were erected to him in, among other places, New York City’s Central Park, the South Carolina statehouse, and outside his old medical school, Jefferson University, in Philadelphia.

After several years of activism, the Philadelphia statue was moved into storage and the statue in Central Park was removed on April 17, 2018. Its plaque was to be replaced by one that educates the public on the origins of the monument and the controversial, non-consensual medical experiments Sims used on women of color. The names (and histories) of the three known women “whose bodies were used in the name of medical and scientific advancement” by Sims, Lucy, Anarcha, and Betsey, were to be recognized on the new plaque.

It’s a recognition some see as overdue. In a 1941 paper titled “The Negro’s Contribution to Surgery,” published in the Journal of the National Medical Association, Dr. John A. Kenney of the Tuskegee Institute, considered the dean of Black dermatology, wrote, “I suggest that a monument be raised and dedicated to the nameless Negroes who have contributed so much to surgery by the ‘guinea pig’ route.”