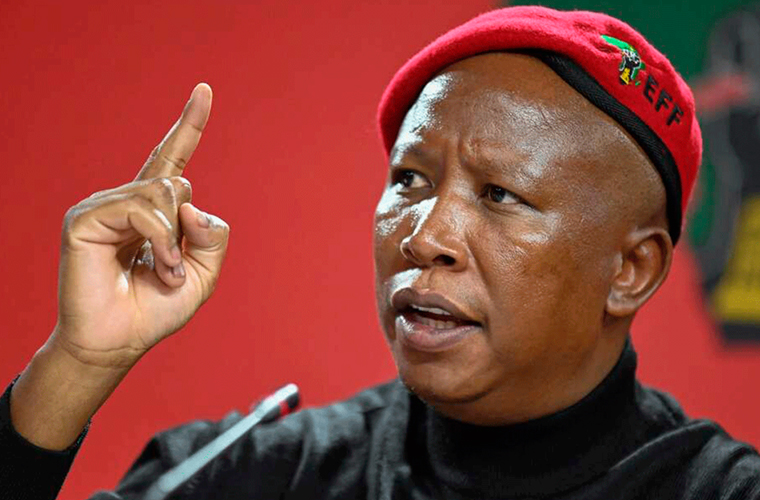 Julius Malema, in full Julius Sello Malema, (born March 3, 1981, Seshego township, South Africa), South African politician known for his fiery outspoken nature and inspiring oratory. He entered the national political arena first as the president (2008–12) of the African National Congress Youth League and then as the leader of the Economic Freedom Fighters, the leftist political party that he helped launch in 2013. He became an MP in the National Assembly in 2014.

Malema was raised by his mother, who was a domestic worker, and his grandmother in what is now the Limpopo province. When he was nine years of age, he reportedly joined the Masupatsela (in English, often referred to as Young Pioneers or Trailblazers) group of the African National Congress (ANC). He joined the ANC Youth League in 1994 and quickly assumed local and regional leadership positions in the group. Malema was also active in the Congress of South African Students organization, becoming province chairman in 1997 and then serving as president from 2001 to 2004. In April 2008 he was elected president of the ANC Youth League by a narrow majority during a contentious group conference.

Malema was outspoken in his support of ANC deputy president Jacob Zuma, who would later become president of the ANC as well as of South Africa. His expressions of support—saying he would “kill for Zuma”—drew considerable criticism, as did his publicly singing an ANC liberation song that included the lyrics “shoot the Boer,” held by many to be racially charged and having the potential to incite violence. (He continued to sing it, and he would later be convicted by a South African court in 2011 for doing so, with the song cited as “hate speech.”)

In March 2010 he was convicted of having used “hate speech” with regard to comments he made about a woman who had accused Zuma of rape in 2006, and in April 2010 a string of incidents—ranging from Malema’s public support of Zimbabwean President Robert Mugabe and his equally public disparagement of Mugabe’s rival, Morgan Tsvangirai, at a time when Zuma was trying to mediate between the two men, to Malema’s verbal altercation with an ousting of a BBC journalist from a press conference—drew rebukes from the ANC and Zuma. Malema responded to Zuma’s rebuke by turning on the leader whom he had once staunchly defended and instead began to criticize him in public. Malema was ultimately called to an ANC disciplinary hearing in May 2010; the terms of a plea bargain agreement required him to publicly apologize for his behaviour and made him subject to suspension from the party should he engage in similar behaviour within the next two years.

Over the following year, Malema retained his popularity within the ANC Youth League and beyond with his populist message, which included calls for nationalizing mines and banks and expropriating white-owned farmland, resonating with many. He was reelected president of the ANC Youth League in June 2011. He also continued the rhetoric and behaviour that the ANC considered disruptive. In August 2011 the party convened another disciplinary hearing after he called for the government in neighbouring Botswana to be overthrown. That incident and others—including further criticism of Zuma—led the ANC to charge him with provoking divisions within the organization, bringing it into disrepute, and sowing intolerance. In November the ANC announced that Malema was found guilty of the first two charges and would be suspended for five years. His appeal was rejected in February 2012, when the ANC also expelled Malema, because of, it said, his behaviour during the appeals period. Malema again appealed, and in April 2012 the ANC upheld the expulsion.q

After months of discussion about forming a new party, in July 2013 Malema announced the launch of the Economic Freedom Fighters (EFF), of which he would be the commander in chief. The party’s official launch was held later that year in October. The EFF styled itself as a “radical, leftist, anti-capitalist and anti-imperialist movement” fighting for economic emancipation. The party’s platform echoed many of the controversial propositions that Malema had espoused while in the ANC, including the nationalization of mines and banks and the expropriation of land for redistribution. It also called for a number of initiatives to increase access to quality education and improve health and welfare services. The new party won about 6 per cent of the national vote—enough to give Malema and 24 other EFF colleagues seats in the 400-seat National Assembly.

Malema’s troubles, however, were not restricted to the aforementioned disputes with the ANC and South Africa’s courts. His expensive tastes drew repeated criticism, not least because they appeared to contradict his populist message, and in September 2012 the South African Revenue Service asserted that Malema owed almost $2 million in unpaid taxes and obtained a judgment to collect the money. That same month national prosecutors charged him with having committed money laundering. Additional charges pertaining to corruption, fraud, and racketeering were later filed against Malema. His trial on those charges was repeatedly postponed.