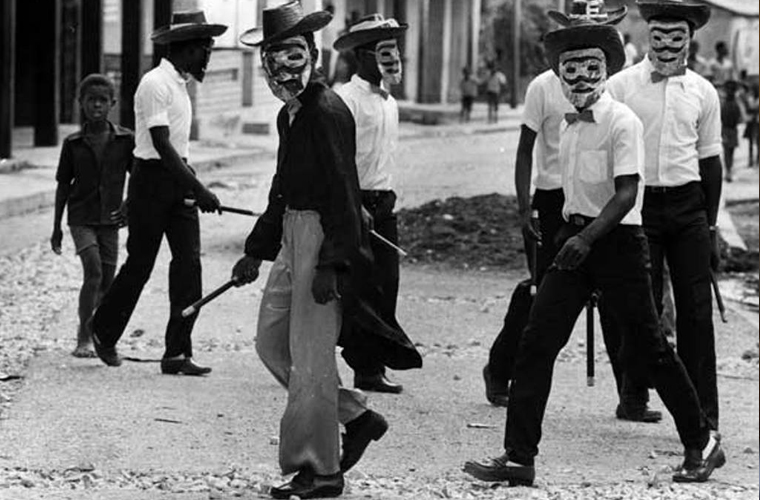 The Milice Volontaires de la Sécurité Nationale (MVSN), or the (Militia of) National Security Volunteers was a Haitian paramilitary force founded in 1958 to defend the autocratic and corrupt regime of François “Papa Doc” Duvalier. The MVSN, commonly known as the Tonton Macoutes, was notorious for corruption and brutality.

In Haitian Creole mythology, Tonton Macoutes was a bogeyman who kidnapped errant children in the night and stored them in his knapsack. Those who were kidnapped, it was said, were never seen again. Appropriately, the name was applied to the MVSN when many Haitians who spoke out against Duvalier’s increasingly corrupt regime were frequently kidnapped in the middle of the night and would disappear forever.

After surviving an attempted coup in 1958 and growing increasingly paranoid, Duvalier reorganized the existing Haitian army by firing generals and transferring the army’s weaponry and ammunition to the palace. In control of the country’s military resources, Duvalier created a loyal force of armed men that became his personal militia, the Tonton Macoutes.  Duvalier’s long-time friend Clément Barbot recruited and administered the militia until 1960 when Duvalier arrested him on suspicion of dissent. By 1963, the Macoutes were under Duvalier’s personal control.

It is estimated that in 1959, as many as 25,000 Haitians were members of the Tonton Macoutes. The majority of militiamen were black. Their trademark attire was dark glasses, expensive clothes, and gun-filled holsters. While some of the militiamen were peasants or houngan (localized voodoo priests) who already commanded the respect of their community, many poorer militiamen capitalized on their newfound powerful position. The Tonton Macoutes terrorized the local population, stealing land and money and raping women. But while self-interest prevailed, the Macoutes also served to create and bolster recruitment, mobilization, and patronage for Duvalier’s regime.

When Duvalier’s son, Jean-Claude “Baby Doc” Duvalier, succeeded his father in 1971, he asserted that the Tonton Macoutes would remain the country’s militia. They continued to terrorize, spreading out further into the countryside. By 1986, however, it was apparent that the militia’s loyalty to “Baby Doc” had faded. When Jean-Claude was forced to flee the country due to civil unrest, the Macoutes remained relatively passive.

The fall of Duvalierism resulted in the disbanding of the MVSN. Some of the former Tonton Macoutes fled the country while many who remained were subject to violent reprisal. In the subsequent elections in 1986, ex-Tonton Macoutes allegedly fired at voters, killing 34, and continued to rebel during the period of political turmoil up until 2000.