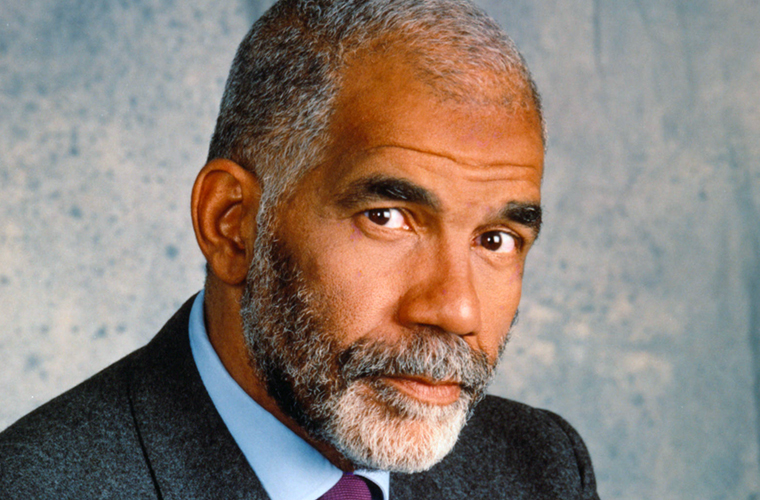 Born Edward Rudolph Bradley Jr., June 22, 1941, in Philadelphia, PA; died of complications related to leukemia, November 9, 2006, in New York, NY. CBS News correspondent and anchor. For a quarter of a century, Ed Bradley worked as a roving correspondent for 60 Minutes, becoming one of the most recognized and well-respected journalists of his time. Over the course of his career, Bradley won nearly every broadcasting award available, including 19 Emmys, a George Foster Peabody Award, and a Lifetime Achievement honor from the National Association of Black Journalists.

Bradley was born in 1941 in Philadelphia, Pennsylvania. His father was an entrepreneur who worked long hours running a vending machine business and a restaurant. Bradley was raised mostly by his mother after his parents divorced but spent his summers in Detroit with his father. Bradley studied education at Cheyney State College, now the Cheyney University of Pennsylvania. Here, the 6foot, 235pound Bradley played center and defensive end on the football team, earning the nickname “Big Daddy.”

Bradley became interested in radio during college after a friend, who worked as a disc jockey, let him read some news on the air one night. After graduating from Cheyney in 1964, Bradley took a job teaching sixth grade. His real passion, however, lay in music and radio so he began moonlighting—without pay—as a DJ for WDAS-FM in Philadelphia. Bradley hosted a jazz show, provided play-by-play announcing for basketball games, and did a little reporting for the station. In the mid1960s, when race riots broke out in the city, Bradley began covering them and did such a fine job the station took notice and started paying him for his work.

Soon, Bradley gave up teaching and in 1967 secured a job as a reporter with WCBS Radio in New York. He left after four years and in 1971 began working as a stringer for CBS News, joining its Paris bureau. As the Vietnam conflict heated up, CBS dispatched Bradley to Saigon, Vietnam, where he became adept at war zone reporting. In 1973, while he was in Cambodia covering the conflict, Bradley was injured when shrapnel from a mortar attack ripped into his back. Cameras rolled as he was carried off on a stretcher.

After the incident, Bradley returned to the United States to work at the CBS bureau in Washington and was given the high-profile job of covering Jimmy Carter’s presidential campaign. Bradley returned to Vietnam, however, to cover the fall of Saigon in 1975, as the South Vietnamese army collapsed and the North Vietnamese Communists captured the city. Bradley was there with U.S. troops during their last hours in Vietnam and was one of the last U.S. citizens to be evacuated from the area.

In 1976, CBS tapped Bradley to be its chief White House correspondent and he began covering Carter’s presidency. He also began anchoring the CBS Sunday evening news. Bradley, however, preferred working abroad, and in 1978 took a job as a correspondent for CBS Reports and was happily dispatched to Cambodia, China, Malaysia, and Saudi Arabia.

One of Bradley’s most memorable stories came from this time. Following the fall of Saigon, countless Vietnamese fled the war-torn area in rickety boats. In 1979, Bradley was covering the story and one day ended up in the waters off Malaysia helping rescue refugees from a sinking craft. Bradley won his first Emmy for the story.

Soon after the poignant report, CBS asked Bradley to join 60 Minutes. He started during the 1981-82 season and although the news program already showcased the talents of seasoned veterans Mike Wallace and Morley Safer, Bradley found his way into the spotlight.

The key to Bradley’s reporting involved his meticulous research and his empathy. He had an uncanny ability to explore any story and look genuine doing it, whether it was politics, human interest, or an expose. During his 25 years on 60 Minutes, Bradley brought viewers tantalizing interviews with such sports stars as Muhammad Ali and Tiger Woods and music icons Lena Horne and Michael Jackson. He spoke with 9/11 widows, and covered stories about sexual abuse in the Catholic Church, and the shortage of AIDs drugs in Africa. Bradley earned an Emmy for a 2000 interview with Oklahoma City bomber Timothy McVeigh; it was the only television interview McVeigh agreed to do.

“He could do a story about anything,” Face the Nation moderator and former Bradley colleague Bob Schieffer told the Los Angeles Times’ Matea Gold. “What made him so good was that he had this ability when interviewing people to get them to be themselves. Sometimes that was to their advantage and sometimes it wasn’t.” Bradley was also a bit rebellious. In the 1980s, he started wearing gold earrings, which caused a stir in the broadcast world. Yet for Bradley, who came across to viewers as a dignified gentleman, the jewelry never took away from his credibility as some feared.

During the early years of his career, Bradley was a rare African American in the news world. He was the first black White House correspondent for CBS News. Bradley, however, worked hard not to let his race define him. He refused to cover only stories related to race—he wanted to cover everything. In the end, Bradley succeeded in his goal of becoming a trailblazer for good journalism, not just one for black journalists.

While Bradley took his work seriously, he also knew there was more to life than reporting. He took vacations to his ski home near Aspen, Colorado, and spent his lunch breaks at the gym. There was also music. Bradley’s lifelong interest in jazz led to a friendship with legendary trumpeter Wynton Marsalis, musical director of Jazz at Lincoln Center. Up until his death, Bradley hosted a weekly radio show from Lincoln Center. Bradley also befriended singer Jimmy Buffett and was known to get onstage and play the tambourine alongside Buffett.

Bradley filed his last story less than two weeks before his death. On October 29, 2006, his expose on a Texas oil refinery explosion aired on 60 Minutes. When he finished taping the segment, Bradley checked himself into a hospital. Most of Bradley’s colleagues did not even know he was ill.

Bradley died on November 9, 2006, at Mount Sinai Hospital in New York City of complications due to chronic lymphocytic leukemia. He was 65. Married three times, he is survived by his wife, artist Patricia Blanchet.