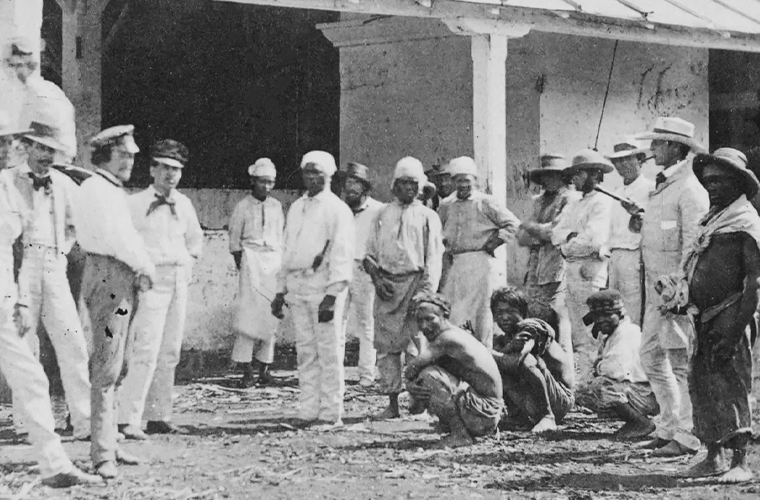 Southern slaveholders, like most Americans, before and since were in love with the future. In the decades before the Civil War, as the United States seized a continental empire and leapt headlong into the age of rail and steam, observers from all over the country were moved to eloquence at the prospect of America’s future greatness. Few were more rhapsodic than Southern planters. ‘All other governments and other people,’ declared former president John Tyler in 1850, were fated to be ‘but mere dependencies of this mighty Republic’.

Looking forward from 1857 to ‘the year 2,000’, another Southern essayist traced the future boundaries of the US: ‘the representative from the now unknown and far-off peninsula of Alaska,’ he predicted, ‘will set down with the luxurious inhabitant of the peninsula of Florida… A confederation then of 500 million freemen, will give laws to an obedient world!’ Today, this seems like a rather dramatic way to describe a Senate meeting between Lisa Murkowski and Marco Rubio. But in the 1850s, Southern confidence in the course of US power was immense.

And for antebellum Southern writers, the destiny of the US was manifestly both imperial and slaveholding. Their future was a future where slavery would continue to thrive. The black slave population would reach 10.6 million in the year 1910, according to the calculations of the New Orleans editor (and later US Census superintendent) James D B De Bow. Later, an Alabama politician quoted another estimate that put 31 million American blacks in chains by 1920. The Richmond-based Southern Literary Messenger, in an 1856 article exploring ‘the condition of the slavery question in the year 1950’, offered the most grandiose prediction of all, that the US slave population would ‘amount to 100,000,000 within the next century’.

What are we to make of these chilling estimates today? Not so long ago, historians would have scoffed at the idea that slavery might have a serious future after the mid-19th century. ‘Of course, slave societies, including that of the South, were doomed,’ announced the great historian Eric Hobsbawm in The Age of Capital (1975). Rapid industrialisation, the rise of democracy and the spread of liberal bourgeois values meant that, by 1850, chattel slavery – ‘a relic of barbarism’, as its opponents called it – faced certain extinction.

Yet scholars today are less confident than ever that slavery faced a natural or inevitable death. More than a decade of recent historical research has underlined the flexibility and dynamism of mid-19th-century slave societies. The United Kingdom abolished slavery in 1833, and France and other European powers followed after 1848 – yet, by 1860, the Americas were home to far more slave-grown products, slave-produced profits and enslaved people than at any time in world history. In the 1850s, at least, slave societies were not yet superseded by the rise of industrial capitalism. They were a vital component of it, using new technology to produce unprecedented quantities of consumer goods for the rapidly growing cities and factories of western Europe and the northern US.

The economic vitality of slavery was a thoroughly international phenomenon. Alongside US cotton, Cuban sugar and Brazilian coffee also flooded the prosperous global marketplace of the 1850s. So it was no surprise that Southern statesmen extended their projections of slavery’s future well beyond US borders. In a letter to his friend Jefferson Davis, James Gadsden, the US minister to Mexico, forecast that the growth of slavery in Cuba would be ‘the nucleus of its restoration in the other Caribbean islands. Southern newspapers and congressional speeches rang out with predictions that emancipated Haiti and Jamaica would soon be re-enslaved, so they could produce consumer goods at the volume and efficiency of Cuba and Brazil. ‘The wants of white men,’ declared the Charleston Mercury in 1857, ‘must triumph over the negro’s absurd claim to liberty.’

Some slaveholders believed that the US should conquer and re-enslave the Caribbean. Yet even those who opposed territorial expansion still agreed that the economic prospects of Latin America depended on black bondage. When the Virginia economist George Frederick Holmes expounded on the ‘necessity of negro slavery in the Amazon valley ‘for the future welfare of humanity, he was not proposing a filibuster invasion of Brazil. The South’s belief in the future of slavery did not spring primarily from a lust for conquest, but from a theory of development.

‘Sugar, rice, tobacco, coffee,’ declared South Carolina’s James Henry Hammond in 1853, ‘can never be produced as articles of wide extended commerce, except by slave labour.’ The emancipation of the British and French West Indies had caused a dip in sugar production, as former slaves left plantations to cultivate their own small farms. In response, European powers shipped in ‘coolies’ from Asia and ‘apprentices’ from Africa, who generally worked on contracts that bound them to fixed terms of labour. For US planters, this amounted to a virtual admission that coercion was an economic necessity in tropical agriculture. The new Asian and African bound labour systems wrote Virginia’s John Y Mason, US minister to France, ‘amounted essentially and necessary to the restoration of slavery’.

Other global trends in the 1850s likewise boosted slaveholders’ confidence in the future of their system. Falling tariffs and the rise of free-trade dogma lubricated the world’s booming trade in slave-grown goods. The advance of European empires, from French North Africa to Dutch East Asia, pointed toward a global future where white masters ruled over non-white inferiors and commanded their labour. And the rise of explicitly racist science, led by scholars from Edinburgh to Boston, suggested that the world’s leading minds were prepared to abandon the naïve egalitarianism of the Enlightenment. Try as they might, abolitionists could not resist the global logic of racial hierarchy and forced labour – the crucial combination that underpinned US slavery.

‘The steady operation of the laws of trade,’ boasted the Mercury, ‘will be vainly resisted by the uncertain impulses of a spurious philanthropy.’ The hard economics of slavery, in other words – assisted by biology, geography and climate – would trump the fanciful politics of abolition.

Except they wouldn’t. The election of 1860 brought to power a party committed to the ‘ultimate extinction of slavery, as Abraham Lincoln insisted in 1858. The Republican victory convinced Southern leaders to flee the union – an independent slaveholding republic, they believed, could thrive on the world stage. Here, of course, they made a fatal error. Four years of civil war converted the world’s richest, most powerful slave society into a smoking ruin, ending slavery’s future forever.

Yet it’s worth remembering that this was not any fated turn of events. In many ways, the 1850s were a moment when the future star of slavery shone brighter than ever. That star was extinguished not by the operation of the laws of history – much less the natural evolution of the market – but by the victory of a political movement, a bloody civil war, and a social revolution across the South.