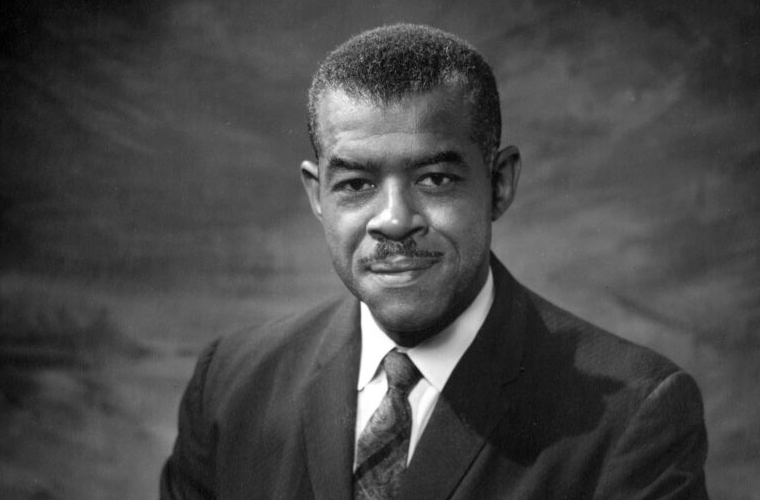 As one of a handful of Black lawyers practicing civil rights law in the 1950s and 1960s, Donald Hollowell was instrumental in the movement to desegregate public institutions throughout Georgia.

During his long career, Hollowell provided counsel to student activists during the Atlanta sit-ins, defended Martin Luther King Jr. and other demonstrators during the Albany Movement, and successfully litigated the landmark case integrating the University of Georgia (UGA). In 1966 he became the first African American regional director of a major federal agency when U.S. president Lyndon B. Johnson appointed him to oversee the southeastern regional office of the Equal Employment Opportunity Commission.

Early Life
Donald Lee Hollowell was born on December 19, 1917, in Wichita, Kansas, to Oceania Bernice and Harrison Hannibal Hollowell. During Hollowell’s youth, his family moved regularly, usually in search of employment for his father, who worked primarily as a custodian but took odd jobs to better provide for his wife and four children.

Although Hollowell’s parents encouraged their children to pursue a college education, the family suffered financial distress during the Great Depression, and in 1935 Hollowell’s father informed him that he would have to suspend his studies to help support the family. After searching unsuccessfully for work, Hollowell enlisted in the army, where he served in the segregated Tenth Cavalry Regiment, better known as the Buffalo Soldiers.

In the army Hollowell encountered institutionalized and pervasive racism for the first time, an experience he later credited with inspiring his civil rights activism. Despite suffering the indignities of Jim Crow, he performed admirably as an enlisted man, completing his high school education through correspondence classes, and rising to the rank of Private First Class Specialist Five by 1938, when he withdrew from regular service to continue his education.

In 1938 Hollowell enrolled at Lane College, an all-Black school in Jackson, Tennessee, where he excelled in the classroom and on the athletic field as a three-sport athlete. During his freshman year, he joined the Colored Methodist Episcopal Church (later Christian Methodist Episcopal Church), whose headquarters were located in Jackson. He also served as the editor of the student newspaper and was elected president of his freshman class, a distinction he retained for the next two years.

Hollowell was recalled to active service in 1941, however, after the Japanese attack on Pearl Harbor in Hawaii, which precipitated U.S. entry into World War II (1941-45). Before his deployment overseas, Hollowell was stationed at Fort Benning, where he met his future wife, Louise Thornton, a Seminole County native living in Atlanta. The two were married in May 1942. Hollowell was then transferred to the European theater, where he again served with distinction, rising to the rank of captain by the war’s end.

“Mr. Civil Rights”
In Atlanta Hollowell quickly distinguished himself as a gifted attorney and advocate for social justice. As the civil rights movement gathered momentum, high-profile plaintiffs sought his counsel, and Hollowell found himself at the center of numerous legal flashpoints in his adopted state. As a result, he enjoyed a reputation throughout Georgia for courage in the courtroom and was often referred to as “Mr. Civil Rights.”

Hollowell first attracted statewide attention in 1956 as lead counsel in a lawsuit filed by Horace T. Ward, a Black applicant denied admission to the UGA Law School. Although Ward’s case was ultimately dismissed, Hollowell earned a decisive legal victory against state-sanctioned segregation in higher education in 1959, when he successfully represented three applicants denied admission to the Georgia State College of Business Administration (later Georgia State University). In that case, a federal district court judge ruled the school’s admission policies to be unconstitutional, paving the way for a more contentious legal showdown.

In 1959 Hollowell accepted yet another school desegregation case, this one on behalf of two undergraduate applicants denied admission to UGA, Hamilton Holmes and Charlayne Hunter. The case captured attention throughout the state because it concerned the integration of Georgia’s flagship institution. Throughout the hearings, school officials maintained that the two students were not denied admission on the basis of race, citing instead a variety of procedural explanations. However, with the help of National Association for the Advancement of Colored People (NAACP) attorney Constance Baker Motley, Vernon Jordan, and Horace Ward, who joined Hollowell’s practice after receiving a law degree from Northwestern University in Chicago, Illinois, Hollowell skillfully exposed contradictions in the state’s defense. As a result, Judge William Bootle issued a ruling on January 6, 1961, ordering UGA to admit the two students.

In 1960 Hollowell provided counsel to college students waging sit-ins at Atlanta’s lunch counters, and he secured the release of Martin Luther King Jr. from the Reidsville prison, where he was held on charges stemming from his participation in the student demonstrations. Hollowell represented King again two years later when he and other activists were arrested as a result of their participation in the Albany Movement.

In 1966 President Johnson appointed Hollowell as director of the southeastern regional Equal Employment Opportunity Commission, based in Atlanta, a position he held for the next nineteen years. From 1971 to 1986, as chairman of the board, he led the Voter Education Project in Georgia, helping to increase the number of registered African American voters in the country from 3 million to 5.5 million.

For his numerous contributions to the cause of civil rights, UGA awarded Hollowell an honorary Doctor of Laws in 2002, and both UGA and Emory University have named professorships in Hollowell’s honor. Over the course of his career, he mentored a number of younger attorneys and civil rights activists, including Ward, Jordan, Marvin Arrington, and Lonnie King. Jordan later called Hollowell “a friend, mentor, boss, idol, and role model.”

Hollowell died in Atlanta of heart failure on December 27, 2004.