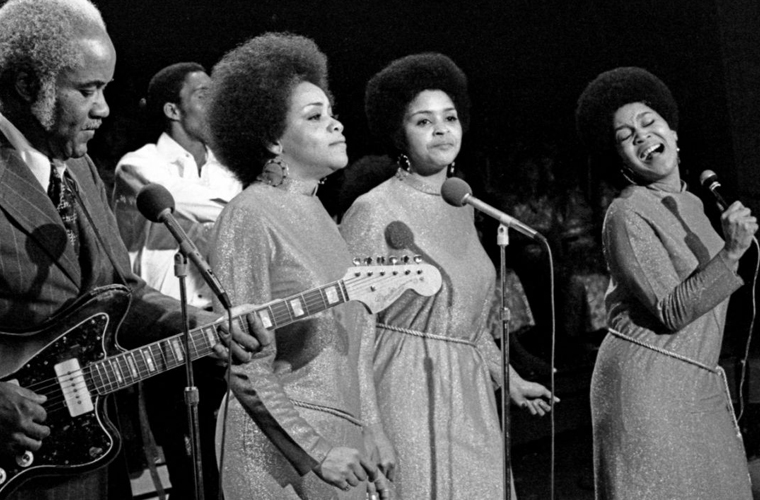 Any barriers between the sacred and the sensual that Aretha Franklin may have left standing were blown away by Mavis Staples and her thrilling contralto. Begun by Mavis’s guitarist father, Roebuck, in the early 1950s, the Staple Singers included her sisters Cleotha and Yvonne (the latter joined after the group had been performing for a while) and her brother Pervis (who left in the early 1970s). As a teenager, Roebuck had picked cotton at Dockery’s plantation, where he was influenced by legendary guitarist Charley Patton and other seminal blues musicians, and he moved to Chicago in the mid-1930s. By the mid-1950s his terse lead guitar and the family’s otherworldly harmonies had made the Staples a leading gospel group. They recorded memorable versions of “Uncloudy Day” (1959) and other sacred classics for the Vee-Jay label.

The Staples finally succeeded in breaking into the secular market after the group signed with Stax Records in 1968 and made a series of records marked by the seamless blending of genres and an infectious optimism. “Heavy Makes You Happy” (1971) was their first secular hit, and “Respect Yourself” (1971) paved the way for “I’ll Take You There” (1972), a number one single on both the pop and rhythm-and-blues charts. The group had a modest hit with a cover of Talking Heads’ “Slippery People” in 1984, and Roebuck had a small role in True Stories (1986), a film by Talking Heads frontman David Byrne.

While the Staples remained active into the 1990s, the solo efforts of their individual members began to take precedence. Roebuck’s solo album Father Father (1994) won a Grammy Award for best contemporary blues album. Mavis, who had maintained a simultaneous solo career beginning in the late 1960s, found renewed success in the 21st century with such albums as Have a Little Faith (2004), a Delta blues-flavored collection of soul, and the Grammy-winning You Are Not Alone (2010). The Staple Singers were inducted into the Rock and Roll Hall of Fame in 1999, and in 2005 the group was honored with a lifetime achievement award from the Recording Academy.