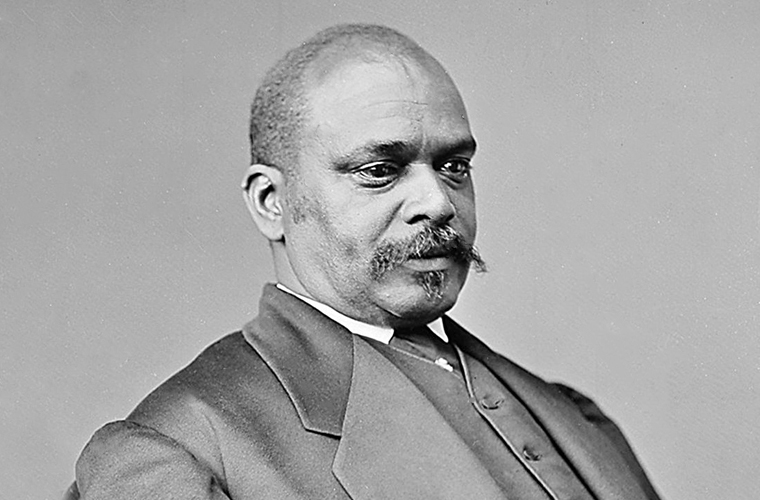 Oscar J. Dunn is best remembered as Louisiana’s first Black Lieutenant Governor, serving from 1868 to 1871. Dunn was born in New Orleans to an unknown father and a Black mother who kept lodging rooms patronized by White actors and actresses. She later married a mulatto stage carpenter named Dunn—the name Oscar Dunn adopted. As a young man, Oscar Dunn was a slave who fled bondage and purchased his freedom. Before manumission, Dunn was self-educated (from reading letters) and learned the art of public speaking from actors who stayed at his mother’s lodging establishment. As a child Dunn worked as an apprenticed plasterer and as a young adult he was a music teacher.

Dunn’s career as a public official unofficially began in December 1864. At mass meetings in New Orleans, he emerged as one of a handful of powerful radical voices demanding Black legal equality and suffrage in Louisiana’s new state government. Although this demand was not immediately won, Dunn was not swayed from his ambition to play a vital role in Louisiana’s Reconstruction efforts. In 1868, Dunn became one of only seven Black men in Louisiana’s Senate, and the only former slave elected to that body.  From 1868 until his death in 1871, Dunn pushed for Black civil rights and suffrage.  He opposed President Andrew Johnson’s policies of pardoning former rebels without enforcement of a loyalty oath; returning their lands (often seized by former slaves during the Union occupation of Louisiana in the Civil War), and the forcing African Americans back on their former slave owners’ plantations as sharecroppers and “convict” labor.

Dunn organized a statewide Republican Convention in 1870 that challenged the power of Louisiana Governor Henry C. Warmoth.  He unsuccessfully challenged Warmoth for the governorship and later led a radical faction of Lincoln Republicans who attempted to have Warmoth impeached for corruption.  Warmoth found allies among the former slaveholders and temporarily became a Democrat in 1871 to frustrate Dunn and other Louisiana Republicans who opposed him and to deprive Dunn of the power to appoint committees in the Senate.  Warmoth was finally impeached in December 1872 and removed from office paving the way for the elevation of Lieutenant Governor Pickney Benton Stewart Pinchback to briefly serve as the nation’s first black governor.  Dunn however never saw that day.  On November 21, 1871, Oscar J. Dunn died of congestion of the brain.