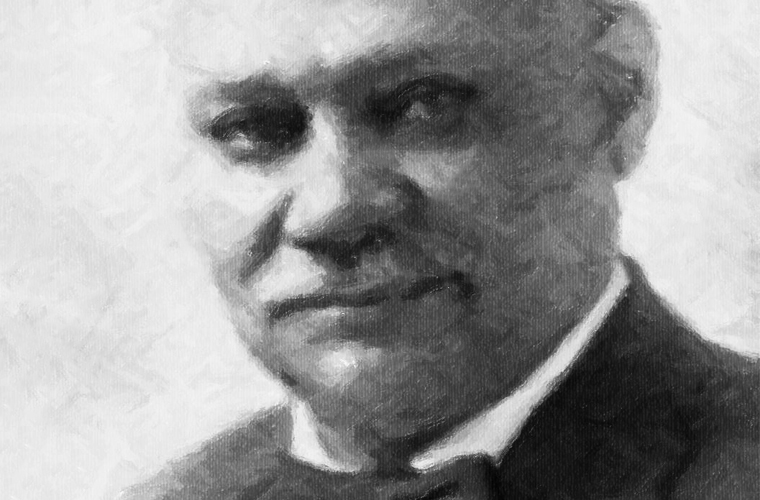 Scipio Africanus Jones was a prominent Little Rock (Pulaski County) attorney and one of the city’s leading African-American citizens at the end of the nineteenth century and during the first decades of the twentieth century. Jones is most significantly remembered for his role in defending twelve men sentenced to death following the Elaine Massacre of 1919. He is also remembered for his role in the Republican Party at a time when many Arkansas Republicans were trying to restrict membership in the party to whites only.

Scipio Jones was born to a slave, Jemmima Jones, in 1863 in the area of Tulip (Dallas County). His father is generally considered to be Dr. Sanford Reamey, a prominent citizen of Tulip and the owner of Jemmima at the time of Jones’s birth. Jones attended schools for African Americans in the Tulip area and later moved to Little Rock, attending Walden Seminary (now Philander Smith College), where he completed the four-year college preparatory course in only three years. He then attended Bethel Institute (now Shorter College) in North Little Rock (Pulaski County), from which he received a bachelor’s degree in 1885. During the next four years, Jones taught public school while studying law on his own time. On June 15, 1889, Jones passed the bar. His credentials were accepted by the Supreme Court of Arkansas in 1900 and by the U.S. Supreme Court in 1905.

Jones practiced law in Little Rock for the rest of his life. He frequently represented indigent citizens and worked to correct abuse and injustice in Arkansas’s penal system; Jones twice served in a temporary capacity as a judge. He was elected a special judge to hear a case in the Little Rock Municipal Court when the regular judge disqualified himself. In 1924, Jones was elected a special chancellor in Pulaski County Chancery Court.

The most significant case in which Jones was involved, though, was the defense of twelve Black men arrested during the Elaine Massacre. Between November 3 and 17, 1919, twelve men were tried, convicted, and sentenced to death for murder in their roles in a supposed Black uprising; the trials were marked by weak evidence, a lack of cross-examination of witnesses, and short deliberations by the local juries. Jones was hired by African-American citizens of Little Rock on November 24, 1919, to work with the firm of George W. Murphy, an attorney hired by the National Association for the Advancement of Colored People (NAACP), to defend the twelve condemned men. By January 14, 1925, all twelve defendants had been released. In one legal brief, Jones described his case as “the greatest case against peonage and mob law ever fought in the land.”

As a leader in the African-American community in Little Rock, Jones is also recognized as responsible for preventing a repeat of the Elaine Massacre in the state’s capital city. He and other community leaders persuaded their fellow African-American citizens to remain out of sight and avoid confrontation amidst the mob violence surrounding the lynching of John Carter on May 4, 1927.

Jones was, at times, criticized for his non-confrontational approach to race relations. He counted many leading white citizens of Arkansas among his friends, including Governor George Donaghey, and Jones—like John Bush of the Mosaic Templars of America (MTA)—worked with Booker T. Washington in building a Black middle- and upper-class society separate from white society. However, when the leaders of the Republican Party in Arkansas sought to exclude African Americans from the workings of the party, Jones resisted. In 1900 and 1902, Jones worked to present a slate of delegates from Pulaski County to the state Republican Party convention, which included African Americans. In both cases, the slate was rejected by the party leadership. Jones himself ran for the Little Rock school board in 1902 but was defeated by a vote of 2,202 to 181 after the Arkansas Gazette published warnings about the danger of having a Black man seated on the school board.

In 1920, Jones helped to organize a separate party convention for Black voters after the Pulaski County convention was moved without advance notice being given to African Americans, but both the state and national party conventions refused to seat the Black delegates. In 1924, the Republican state committee did agree to hold party conventions in “places where all Republicans can attend” and expanded its committee to include two positions reserved for African Americans. On May 1, 1928, Jones was chosen as a delegate from Arkansas to the Republican National Convention. He also served in this position in 1940. In 1930, Jones was among a group of African-American lawyers who sued (unsuccessfully) the Democratic Party in Arkansas to reverse rules that prevented Black citizens from voting in the Democratic state primary elections.

In addition to his legal and political careers, Jones attempted to gain income through investments, although he appears not to have been successful. Jones is said to have owned roughly ten houses in Little Rock around 1907, including a “splendid” house in which he and his family lived at 1808 Ringo Street. Jones was a major stockholder in the Arkansas Realty and Investment Company and was also elected president of the company. The corporation failed and was dissolved on June 19, 1911. Jones also heavily invested in the People’s Ice and Fuel Company of Little Rock, which succeeded for a time but failed during the Depression.

Jones was married twice. His first wife, Carrie Edwards Jones, was twenty-five when they were married on March 14, 1896. They had a daughter, Hazel, who died as a young adult. After the death of Carrie, Jones married Lillie M. Jackson of Pine Bluff (Jefferson County) in 1917. The couple had no children.

Jones died in his home in Little Rock on March 28, 1943. His funeral at Bethel AME Church in Little Rock (where Jones had been a member for over fifty years) was attended by many government and political leaders, both African American and white. He was buried at Haven of Rest Cemetery in Little Rock. Among the honors given to Jones are two significant buildings named for him. The junior and senior high school in North Little Rock was named for him from its construction in 1928 until its closing (due to the end of segregated education) in 1970. The U.S. post office at 1700 Main Street in Little Rock was named for Jones in 2007, and a portrait of Jones by artist Wade Hampton was installed in 2022. It was announced in November 2021 that Searchlight Pictures acquired script rights to the book The Defender by E. Nicholas Mariani; the film will star Sterling K. Brown as Jones.