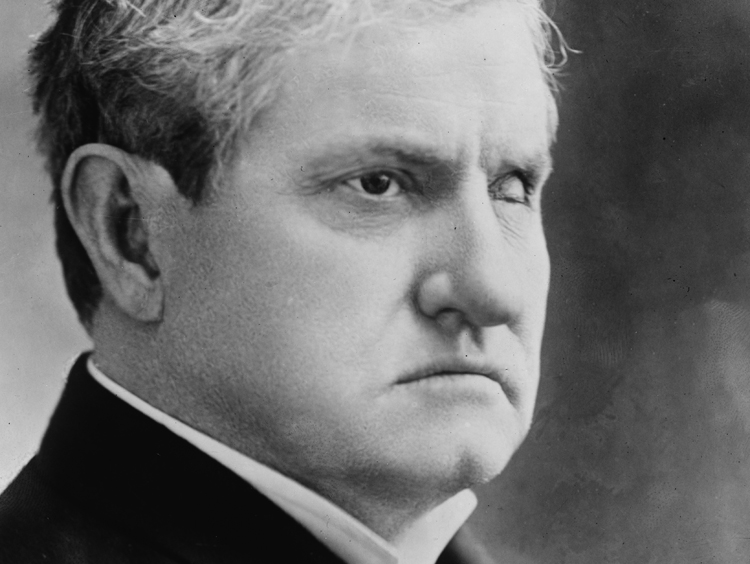 In this March 23, 1900, speech before the U.S. Senate, Senator Benjamin R. “Pitchfork Ben” Tillman of South Carolina defended the actions of his white constituents who had murdered several black citizens of his home state. Tillman blamed the violence on the “hot-headedness” of Southern blacks and on the misguided efforts of Republicans during the Reconstruction era after the Civil War to “put white necks under black heels.” He also defended violence against black men, claiming that southern whites “will not submit to [the black man] gratifying his lust on our wives and daughters without lynching him”—an evocation of the deeply sexualized racist fantasies of many Southern whites.

. . . And he [Senator John C. Spooner, of Wisconsin] said we had taken their rights away from them. He asked me was it right to murder them in order to carry the elections. I never saw one murdered. I never saw one shot at an election. It was the riots before the elections precipitated by their own hot-headedness in attempting to hold the government, that brought on conflicts between the races and caused the shotgun to be used. That is what I meant by saying we used the shotgun.

I want to call the Senator’s attention to one fact. He said that the Republican party gave the negroes the ballot in order to protect themselves against the indignities and wrongs that were attempted to be heaped upon them by the enactment of the black code. I say it was because the Republicans of that day, led by Thad Stevens, wanted to put white necks under black heels and to get revenge. There is a difference of opinion. You have your opinion about it, and I have mine, and we can never agree.

I want to ask the Senator this proposition in arithmetic: In my State, there were 135,000 negro voters, or negroes of voting age, and some 90,000 or 95,000 white voters. General Canby set up a carpetbag government there and turned our State over to this majority. Now, I want to ask you, with a free vote and a fair count, how are you going to beat 135,000 by 95,000? How are you going to do it? You had set us an impossible task. You had handcuffed us and thrown away the key, and you propped your carpetbag negro government with bayonets. Whenever it was necessary to sustain the government you held it up by the Army.

Mr. President, I have not the facts and figures here, but I want the country to get the full view of the Southern side of this question and the justification for anything we did. We were sorry we had the necessity forced upon us, but we could not help it, and as white men, we are not sorry for it, and we do not propose to apologize for anything we have done in connection with it. We took the government away from them in 1876. We did take it. If no other Senator has come here previous to this time who would acknowledge it, more is the pity. We have had no fraud in our elections in South Carolina since 1884. There has been no organized Republican party in the State.

We did not disfranchise the negroes until 1895. Then we had a constitutional convention convened which took the matter up calmly, deliberately, and avowedly with the purpose of disfranchising as many of them as we could under the fourteenth and fifteenth amendments. We adopted the educational qualification as the only means left to us, and the negro is as contented and as prosperous and as well protected in South Carolina today as in any State of the Union south of the Potomac. He is not meddling with politics, for he found that the more he meddled with them the worse off he got. As to his “rights”—I will not discuss them now. We of the South have never recognized the right of the negro to govern white men, and we never will. We have never believed him to be equal to the white man, and we will not submit to his gratifying his lust on our wives and daughters without lynching him. I would to God the last one of them was in Africa and that none of them had ever been brought to our shores. But I will not pursue the subject further.

I want to ask permission in this connection to print a speech which I made in the constitutional convention of South Carolina when it convened in 1895, in which the whole carpetbag regime and the indignities and wrongs heaped upon our people, the robberies which we suffered, and all the facts and figures there brought out are incorporated, and let the whole of the facts go to the country. I am not ashamed to have those facts go to the country. They are our justification for the present situation in our State. If I can get it, I should like that permission; otherwise, I shall be forced to bring that speech here and read it when I can put my hand on it. I will then leave this matter and let the dead past bury its dead.