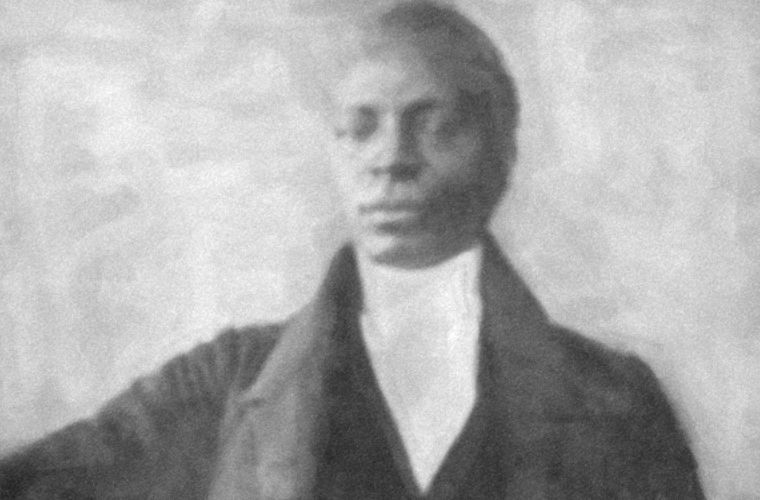 The businessman and abolitionist James Forten was born free in Philadelphia in 1766. He attended a Quaker school headed by abolitionist Anthony Benezet. At the age of fourteen, he went to sea and became a powder boy on the Royal Louis, a colonial privateer under the command of Captain Stephen Decatur, father of the nineteenth-century naval hero of the same name. After one successful sortie against the British, the Royal Louis was captured by a group of British ships, and Forten and the rest of the crew were taken, prisoner. Had he not befriended the son of the British captain, Forten, like many African Americans in his situation, might have been sent into slavery in the West Indies. Instead, the British captain ensured that Forten would be transferred to Jersey, a prison hulk in New York harbor, where many prisoners succumbed to rampant disease; Forten avoided serious illness and after seven months was released.

Shortly after his release, Forten began to work under the tutelage of Robert Bridges, a Philadelphia sailmaker. Forten’s skill and aptitude guaranteed his success in the industry, and by the age of twenty, he was the foreman of Bridges’s shop. Upon Bridges’ retirement in 1798, Forten became the undisputed master of the shop and developed a reputation for excellent service and innovative sail handling techniques. His business grew; some estimates suggest that he had a fortune of over $100,000 by the early 1830s.

Forten used both his fortune and his fame to forward his agenda for the destruction of slavery. One of the most prominent and vocal Philadelphians on the issue, Forten was a lifelong advocate of immediate abolition. In 1800 he was a petitioner to the U.S. Congress to change the terms of the 1793 Fugitive Slave Law, which permitted suspected runaways to be seized and arrested without a warrant or access to due process. Forten refused to rig sails for ships that had participated in or were suspected of participating in the slave trade. In 1812, along with well-known Philadelphians Richard Allen and Absalom Jones, he helped raise a volunteer regiment of African Americans to help defend Philadelphia were the city to be threatened by the British.

In September 1830 Forten was a participant in the first National Negro Convention in Philadelphia. Its goal was to “consider the plight of the free Negro” and to “plan his social redemption.” At the next annual convention, Forten used his influence to oppose funding for the American Colonization Society, which supported black emigration to Liberia; at other times, however, Philadelphia’s black elite, including Forten, had advocated emigration to Haiti and Canada.

In 1832 Forten and several other African Americans forwarded another petition to the Pennsylvania legislature asking it not to restrict the immigration of free blacks into the state, nor to begin more rigorous enforcement of the 1793 federal Fugitive Slave Law. Much of their argument was based on two main principles: a moral argument based on the evils of slavery and an economic argument—that free blacks were extremely productive members of the Philadelphia and Pennsylvania communities. As one of the organizers of the American Anti-Slavery Society in 1833, Forten provided support, especially economic, to abolitionist activities. Forten’s generous support greatly aided the continuing publication of William Lloyd Garrison‘s abolitionist Liberator. Around 1838 he also went to court in a vain attempt to secure the right to vote.

Forten was a founder and presiding officer of the American Moral Reform Society. The society stressed temperance, peace, and other Garrisonian ideals, which included the full and equal participation of women in anti-slavery activism and society in general. Forten’s reputation for good works was well known: He received an award from the city of Philadelphia for saving at least four, and perhaps as many as twelve, people from drowning in the river near his shop. When he died in 1842, thousands of people, many of whom were white, reportedly attended his funeral.

Even before his death in 1842, the legacy of Forten’s deep belief in abolition was carried on by his family. Forten’s children, and later his grandchildren, would figure as prominent abolitionists and civil rights activists throughout the nineteenth century. Forten’s son James Jr. and his son-in-law Robert Purvis were active in the abolitionist movement from the 1830s onward and often collaborated with the elder Forten in his various activities. All of Forten’s daughters were involved in antislavery affairs, and Charlotte Forten Grimké, Forten’s granddaughter, became a well-known author, educator, and civil rights, activist.